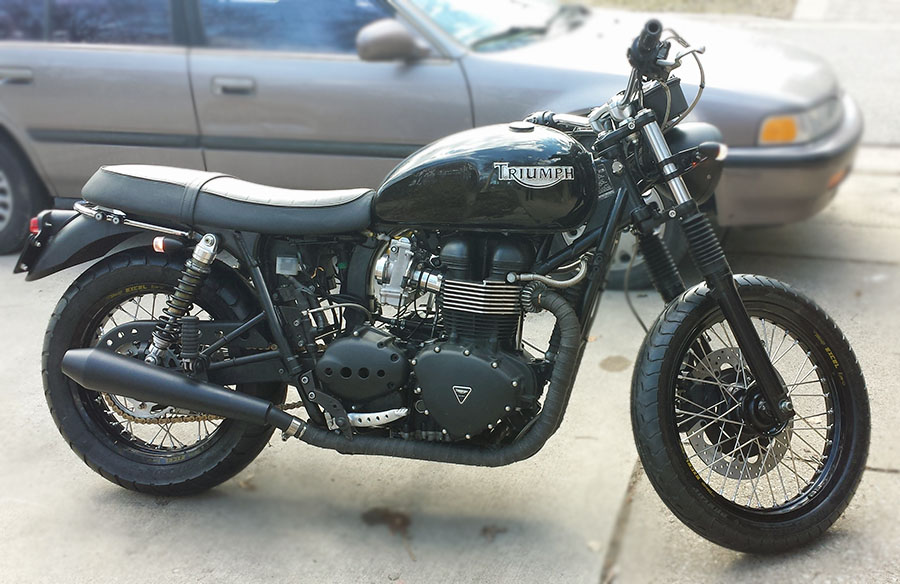 Today I consulted my Haynes repair manual to discover how to remove the exhaust headers on my 2008 Triumph Bonneville. 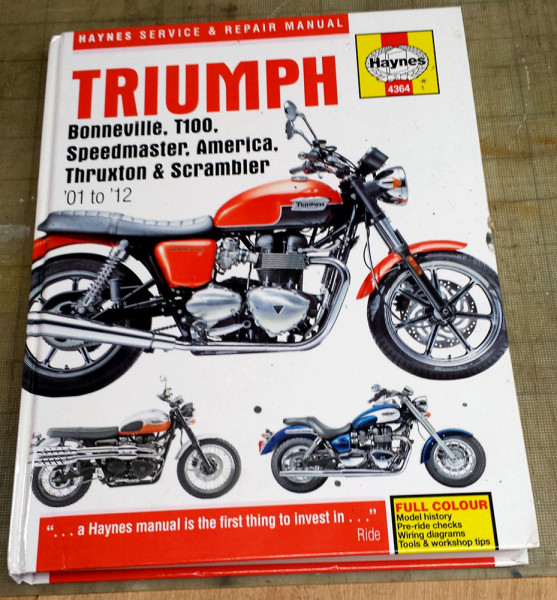 Since my slip-on exhaust mufflers were already removed, all that was involved was to: 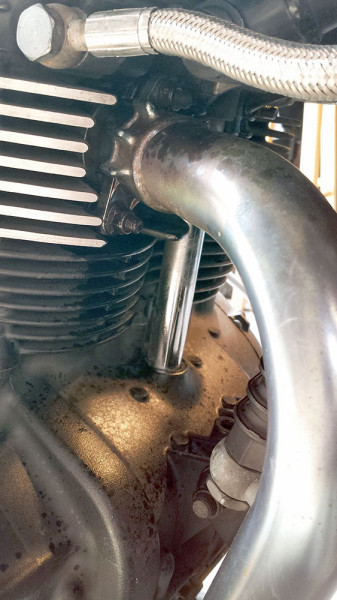 2 bolts at each header cylinder port 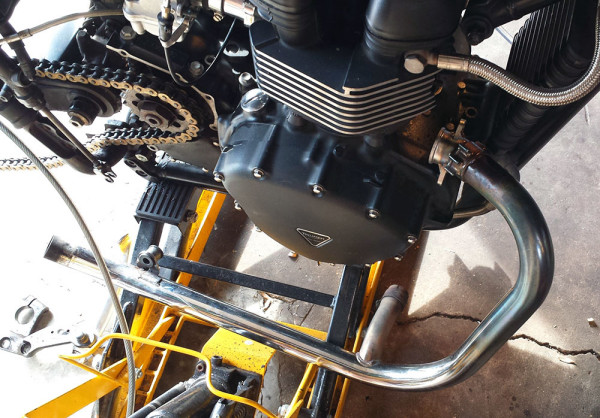 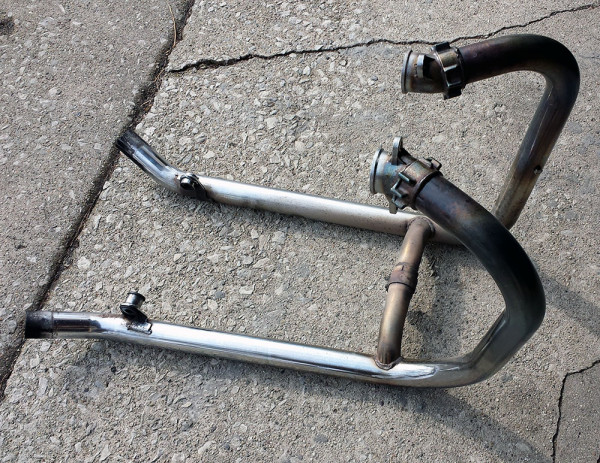 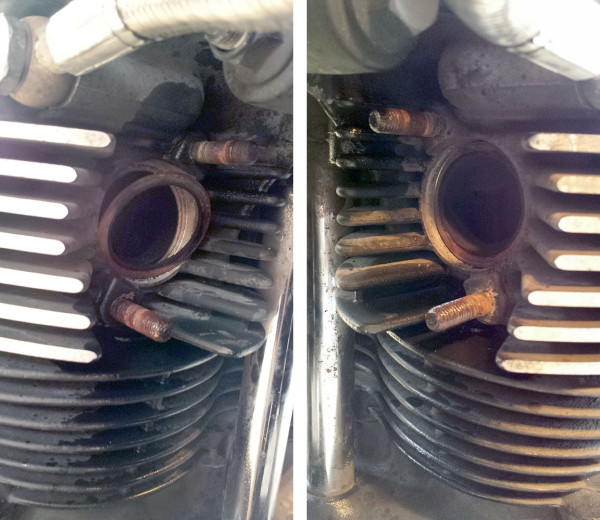 Exhaust ports on each cylinder. There is a copper seal ring that needs to be replaced when re-installing.

In the course of researching this modification, I ran across a great little product by Maund Speed Shop in Pasadena, California. They call them their “Finned Exhaust Clamps.” Basically these are cast aluminum fins that clamp over the stock exhaust pipe as shown below. They cost $120 for a pair. 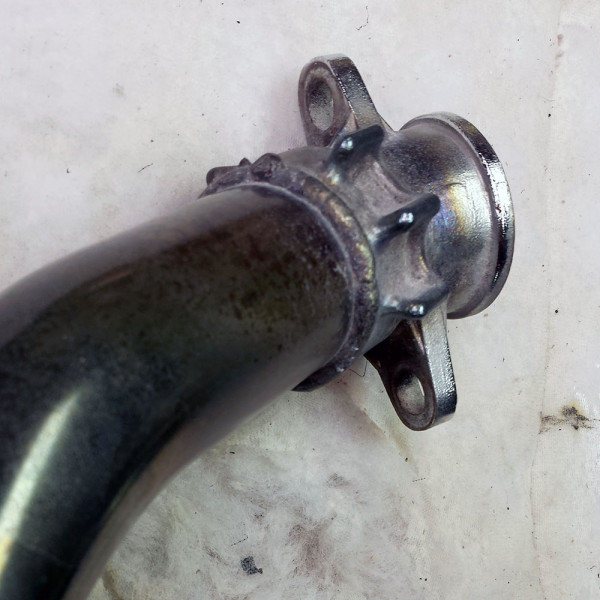 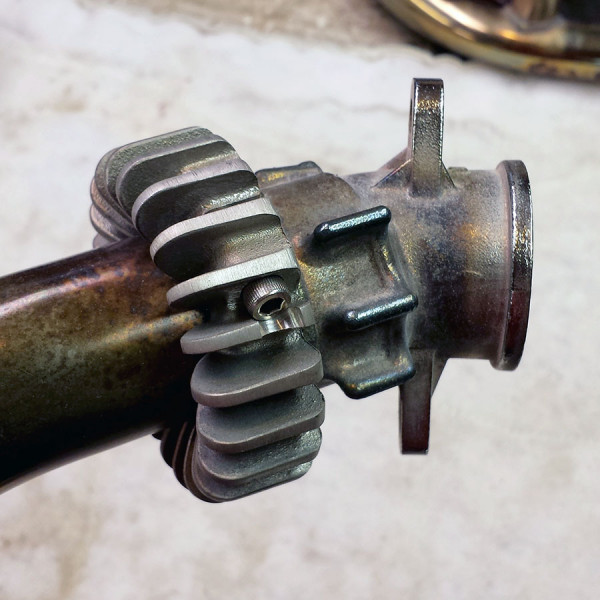 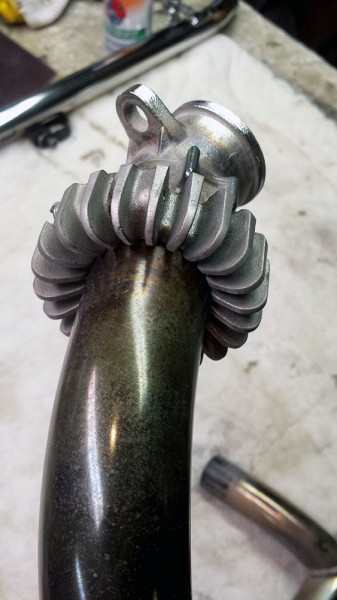 These look much more like the original Triumph Bonneville’s of the 1960’s and 70’s. I plan to use these to clamp the heat wrap tape at the cylinder port end of the pipe. I plan to use stainless wire or a clamp at the other end.

I first studied a number of YouTube videos on the topic and picked up a few pointers. I’m using a graphite black insulating wrap product made by Thermo Tec called Cool It. 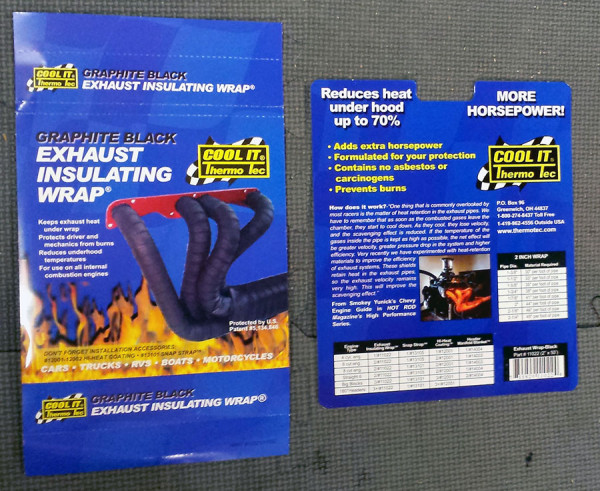 I cleaned each header thoroughly with rubbing compound and Gunk parts cleaner.

Next I prepared the exhaust tape by soaking it in a pail of water for 10-15 minutes. This makes the tape more flexible and easier to work with. 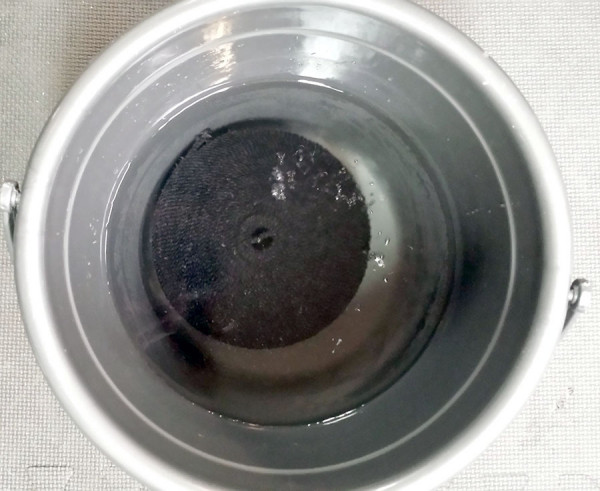 Soaking the tape in a pail of water.

I also gathered some of the tools I would need and had them close at hand. 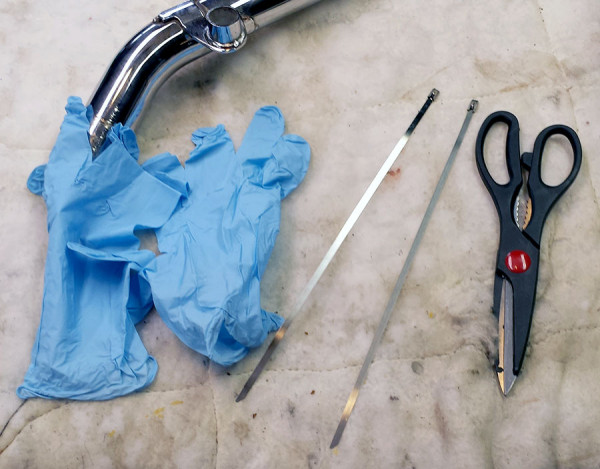 I put one header in a vise to free my hands to concentrate on the wrapping. I started at the exhaust end (a tip I learned from YouTube, so that the tape seams face the rear of the bike, and don’t catch dirt and moisture as easily).  After I got the tape started a few turns, I clamped it in pace with a stainless steel tie I purchased at an O’Reilly auto parts store. 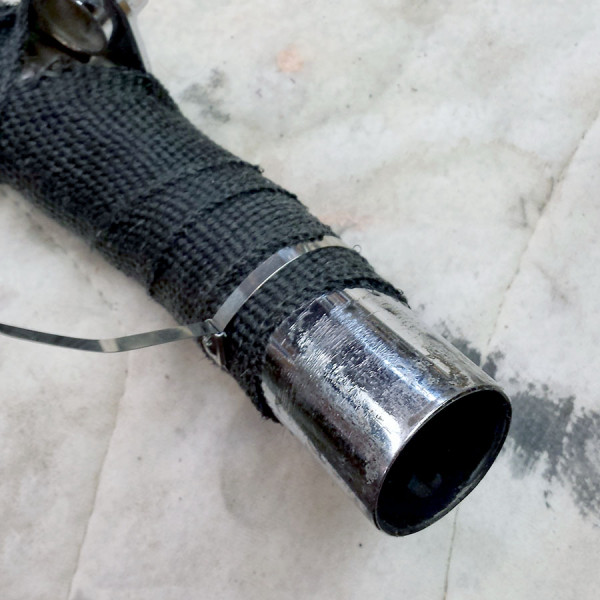 Leave space at the end for the slip-on muffler and clamp.

I worked my way up toward the front of the pipe, overlapping about 1″ or half of the tape on each turn. I had to do some fancy wraps to cover around the rear mount, and the crossover pipe. 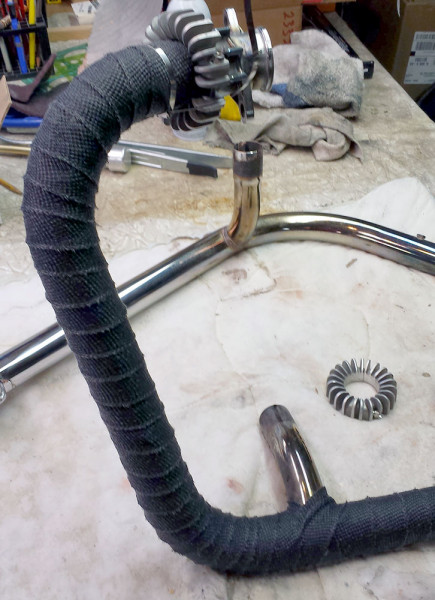 Wrap toward front and end just shy of the stock cooling fins.

Once I reached the top, I ended the tape just shy of the stock cooling fins, cut off the tape, folded the end under about 1/2″ and the applied the Maunde Cooling Fin as a clamp to hold it in place. I also added a stainless tie to hold the front edge of the tape down. 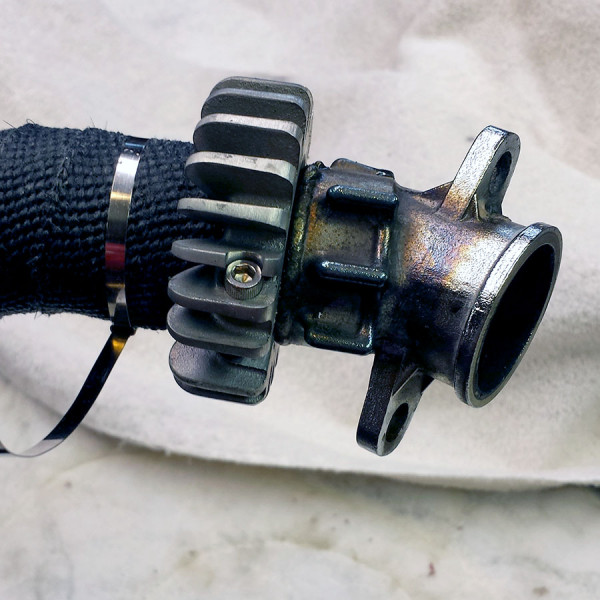 Maunde Cooling Fin Clamp close up – They come in 2 halves with bolts to clamp them tight around the header.

I repeated the process on the other header. 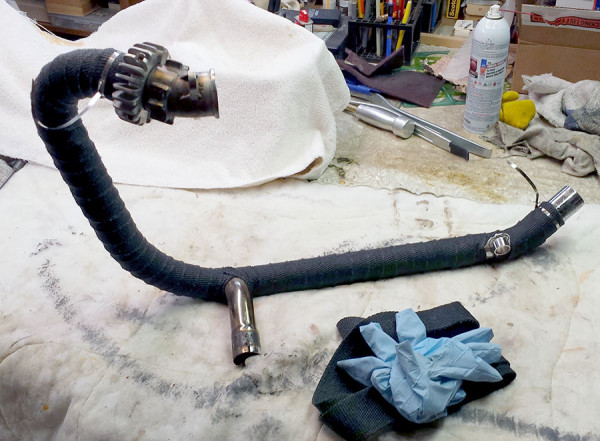 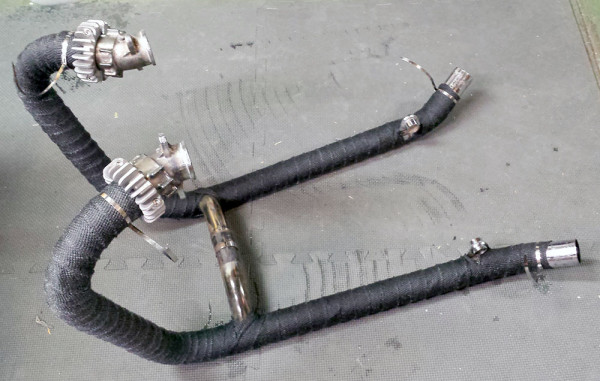 I slipped the completed header set together so it would stand on its own and put it in a warm place to dry. I used some more time to clean the clamps and bolts that will be used to mount everything back on the Bonneville. I’m very pleased with how these are looking. 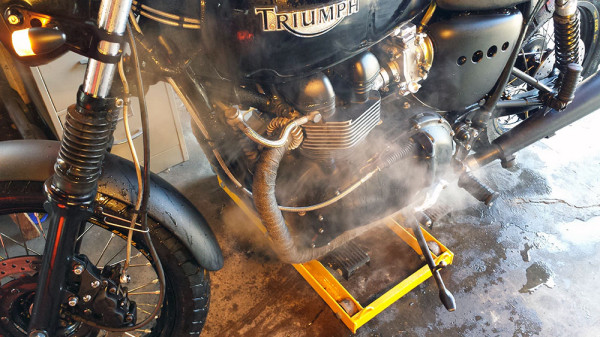 The header wrap will smoke up really good at first – so make sure you do it in a well vented area!

I mounted the pipes back on the bike and ran the engine while the bike was on the jack to cure it with the heat from the pipes. Most of the smoke is gone in 30 minutes, but I am still getting a whif every now and then days later.

NOTE! I have it from a trustworthy authority that it is never a good idea to leave your engine idling for extended time while a Bonneville is parked on the side stand. The crankshaft on the right (high) side does not get enough oil in this position and you can burn out your engine doing this! It is also advised to run a fan on the engine while it is idling on a level jack or center stand.