New YSS Shocks (or Now, I Don’t Want A Tiger So Much, Anymore…) 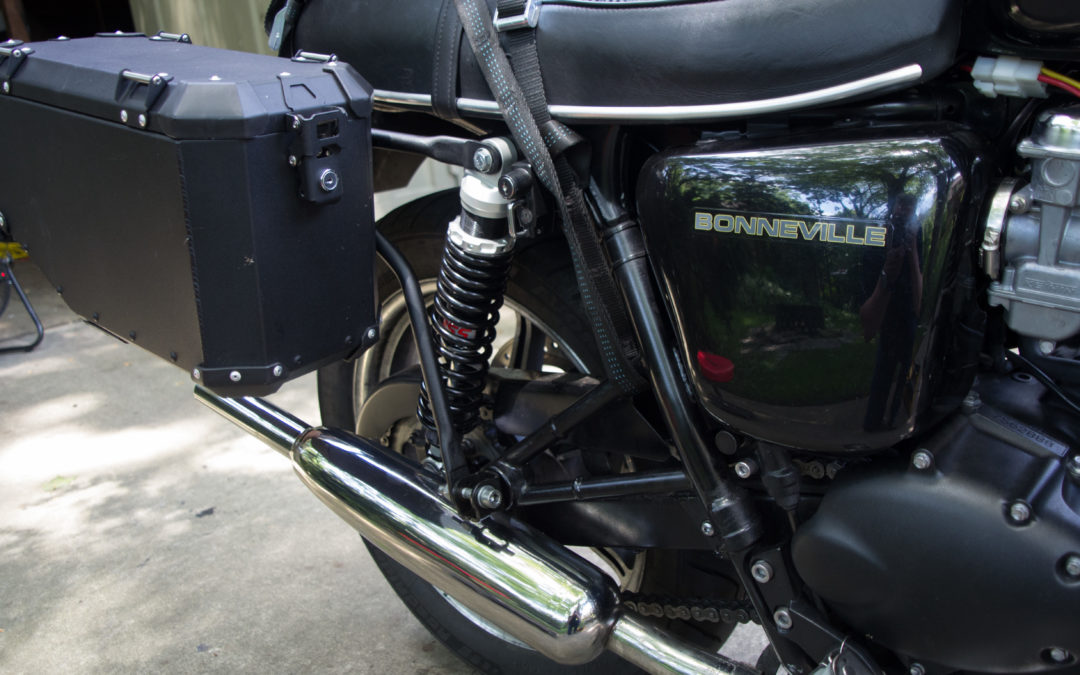 In a previous post, I mentioned Aad and Mike Schram, a father-son team who rode around the world. Aad (the dad) made the trip on a Bonneville T-100. Along their journey, the pair stopped in at the YSS headquarters in Thailand. Aad had been running the same shocks I have been: a pair of Hagon 2810’s. So, his story about replacing them caught my attention. His shocks had finally given out. While at YSS, the R&D technicians mapped a new design for the suspension of the Bonneville and produced a set of rear shocks and fork adjustments that would make the Bonneville a lot more ADV capable — able to handle punishing roads, or even non-existent ones, with ease.

Aad and Mike run Nomad-ADV in their home country of The Netherlands. Through Nomad-ADV, they are selling the suspension configuration developed for them by YSS. I got in touch with Aad and discussed my wants. Since my bike is a mag wheel Bonnie, I don’t have the 19 inch front wheel that Aad’s T-100 has. I was concerned that might make a negative difference. But, we decided to forge ahead and try to arrive at a good configuration for a Bonneville with 17 inch front wheel.

I decided to do this project in two phases: install Scrambler length rear shocks first, then add 20mm (and a PD Valve) to the front forks. To make the fork adjustments, I have to send the forks to The Netherlands, so that Aad can modify them and send them back to me. If nothing else, that sounds to me like something I should wait until winter to do. 😉

I decided to go with the RZ’s and ordered them from Mike (Aad’s son) on June 16. I received them 3 weeks later. Nice and fast!

One of the first things I noticed about the YSS Shocks was the bushings. They don’t use a rubber bushing like my Hagon’s did. Instead, they use a sealed metal bushing, which pivots inside the eyelet. I like this — I’m thinking it will not deteriorate as severely over time as the Hagon bushing did. 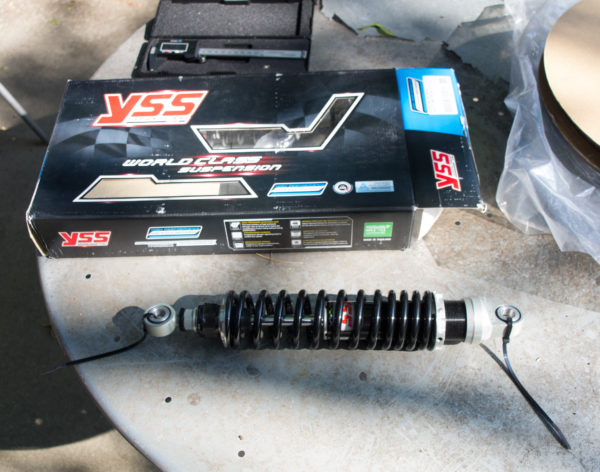 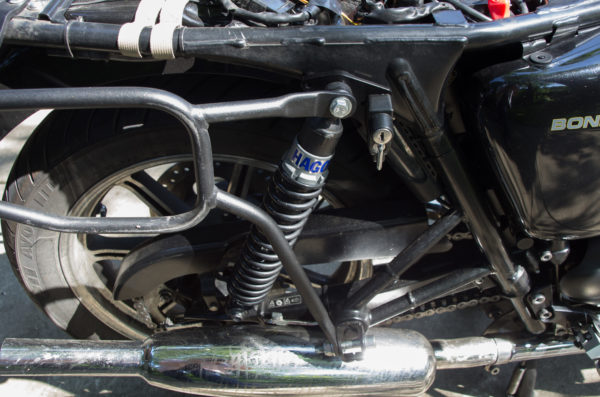 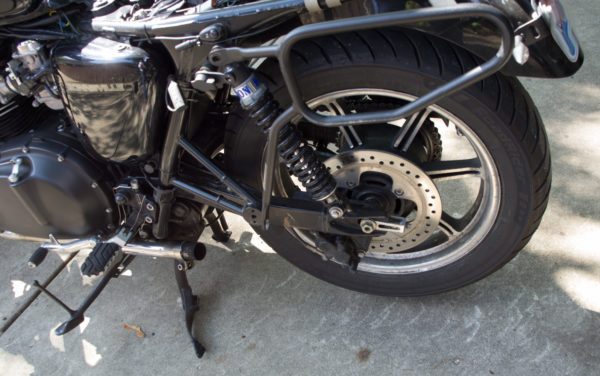 Sadly, I realized I was going to have to remove the exhaust to do this work. I *hate* removing the exhaust, especially the one on the right side. For some reason, it’s a REAL pain in the ass to remove.

A comparison of my outgoing Hagon 2810’s and the incoming YSS RZ. That extra 30mm really shows!

After removing the Hagons, I gave them a close inspection. Overall, they’ve done well. But, I can see the bushings beginning to deteriorate. So, it’s good that I’m removing them. 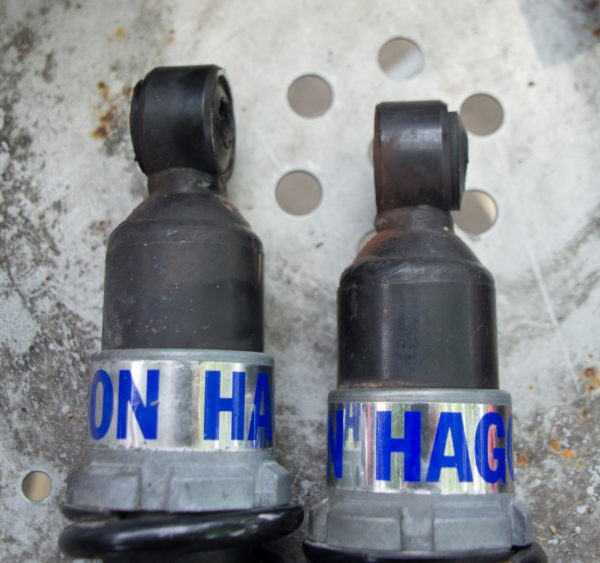 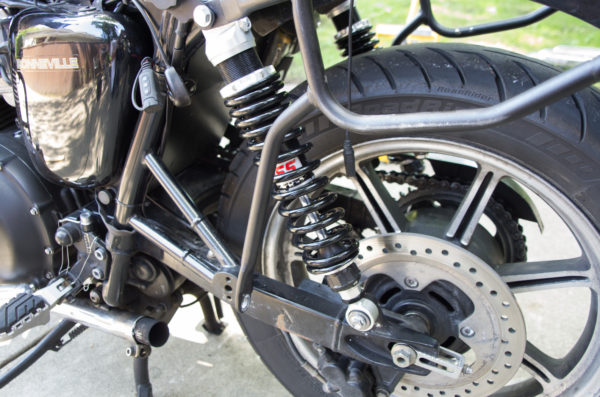 The new RZ in place. 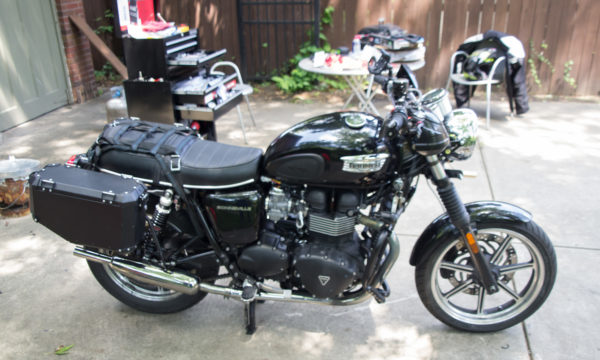 Everything back on and buttoned up! (Except for my focus, apparently…) 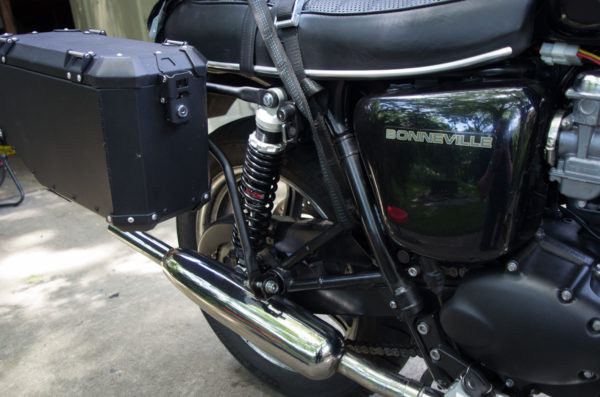 With the extra 30mm, the rear wheel is now at almost the exact same height as my Triumph center stand. As such, it makes the center stand a little bit more wobbly than I expected. Not sure what to do about that. 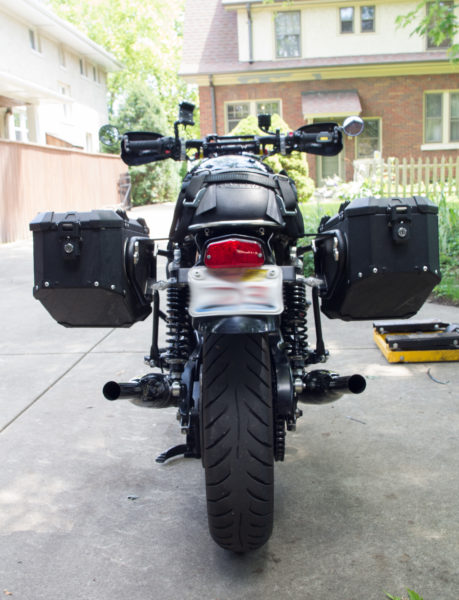 Also, the raised rear wheel gives a bit more lean on the sidestand. I may end up getting a Scrambler sidestand, to help equalize things. 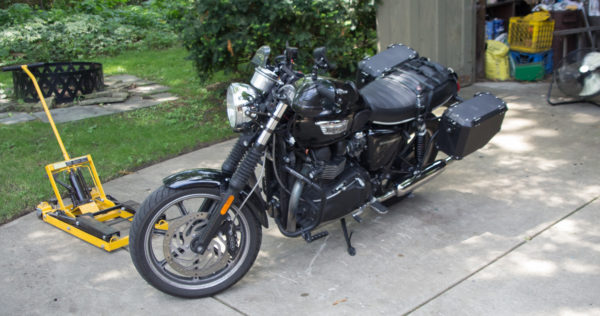 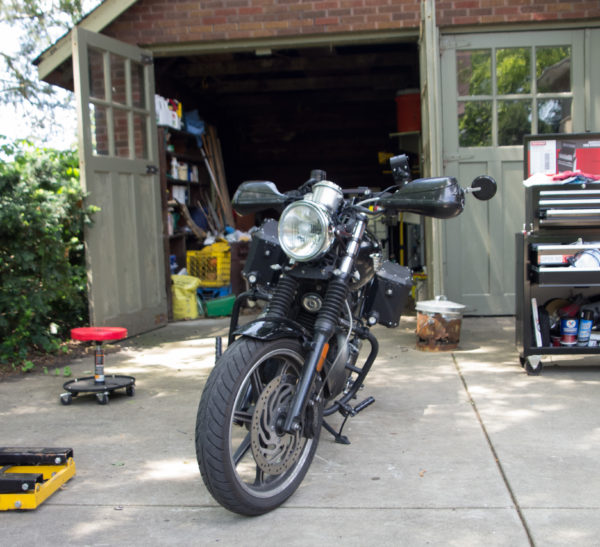 I took her for a ride after finishing everything. What a joy! Around where I live, there are some streets that are concrete slab and which don’t have the smoothest transition at the expansion joints. After the rear shock switch, I still felt those bumps — but, only through the handlebars.

More important was the railroad crossing test. We have some pretty rough crossings where I typically have to stand (a good practice anyway!) in order to avoid bottoming out the rear. With the new RZ’s, those crossings were dead easy. Very pleased! I continued my ride to some of the crappiest roads I know around here (Butterfield Road, anyone?) and the experience was very smooth.

Also, now that the back end is up higher, the front drops into corners more quickly. This, along with a 17 inch front wheel, makes for an extremely nimble Bonnie. This will diminish after the front fork extension work is done. But, until then, it’s more fun!

Until now, I had been thinking in the back of my mind, “If you’re really serious about taking your riding off of the pavement, you may need to seriously think about a Tiger, an F800, a KLR650 or a KTM, in order to get the ground clearance you need.” After today’s installation, though, I’m not so sure that will really be necessary.

If you’re like me and looking to adventurize your Bonneville, increased ground clearance and suspension travel are two things you’ll need to address. The YSS setup from the fine father-and-son team at Nomad-ADV will definitely get you on the right track. Please, drop by their website. Also, check out their travel blog. It’s inspiring stuff!