I purchased a set of Mikuni HSR42 carburetors from Bonneville Performance in 2014. The Mikuni Carb Kit was designed and intended for a 2008 Bonneville twin 865cc engine to replace the stock OEM Keihin CVK 36 carbs that had become too restrictive due to intake and exhaust modifications to the engine. Specifically, the airbox and air injection systems had been removed, and K&N pod filters installed. Also, the exhaust had been opened up by using British Customs Predator or Sleeper exhausts.

The Mikuni HSR carbs are flat-slide carbs, that provide a much quicker and direct throttle response compared to the vacuum controlled floating round slide piston design of the Keihin CVK. Keihin also makes a flat slide carb called an FCR that comes in a 39mm size most often used for Triumph Bonneville’s. The Mikuni HSR’s come in three sizes: 42mm, 45mm and 48mm. According to Bill Gately of Bonneville Performance, the Mikuni’s are much easier to fine tune than the Keihin’s with only 2 external adjustments required: idle adjuster screw and the pilot air screw.

The reason for upgrading from the HSR42 to the HSR45 is simple. During 2015, I tore down the 2008 Bonneville and rebuilt it, including having Bill rebuild the engine to similar spec’s as the engines he builds for his Supertracker race engines, or for his custom Street Trackers. My engine came back at 1100cc with the following spec’s:

Due to this, the Mikuni HSR42’s were too small and did not make full use of the engine performance modifications, even after trying them with larger pilot jets @ 25 and larger main jets @ 147.5.

Bill Gately sent me the new Mikuni HSR45’s with pilot jets @ 25, main jets @ 150 and needles @ 96 center. The exterior carb cases and dimensions are the same between the 2 models. Only the throat diameter is different.

The process began by removing the Bonneville seat, side covers and fuel tank to gain access to the carbs. In my case, I have to also disconnect the crankcase breather tube to allow for the carburetor choke cables to come off with the carbs. Next I loosened the adjuster bolts on my throttle cables and disconnect the ends at the carb. Removing the top carb bracket bolt and loosening the hose clamps around the intake manifolds frees the carbs for removal.

With the Mikuni HSR45 carbs still on the bench, I ran new 5/16″ Tygon fuel lines to the carb fuel intakes, connected to a “T” fitting and then ready to be connected to the fuel shutoff valve on the bottom of the fuel tank. Then I mounted the new carbs in place of the old, shimming the upper mounting bracket with flat washers to avoid any uneven stress on the throttle rod assembly. The slightest stress can cause the throttle release to be slow, or in extreme cases to stick in the open position!

Now it was time to tighten the upper carb bracket mounting bolt, the intake manifold hose clamps and reconnect the throttle cable ends. Once everything was inspected for fit and a firm connection, I mounted the fuel tank and connected the fuel line. The engine did not fire up on first try. I checked the pilot air screws and found them to be way too far out. By backing them in so they were 3/4 to 1 turn out, the engine fired up. After allowing the engine to warm up at idle, I checked the balance of the air flow between the carbs with an air-flow sync tool.

I adjusted the idle screws until the engine idled at ~1300 RPM and both carbs were pulling in the same amount of air flow. After checking everything over and putting the side covers and seat back on I took it for a test ride.

I noticed the difference right away. The engine was much smoother and easier to control at low speed. The engine seemed to be working less hard. As I entered the highway and accelerated on the on ramp I also noticed more power and torque all the way from 3000 to 6000 RPM. The engine felt like it was working effortlessly. The throttle response felt instantaneous. It was a blast to ride!

I plan to take the Bonneville with this current setup to Motor Cycle Center in the next few weeks and have it fully dyno tested and tuned. I expect the HP to be in the 100-104 range and the torque to be in the 72-76 ft. lb. range. 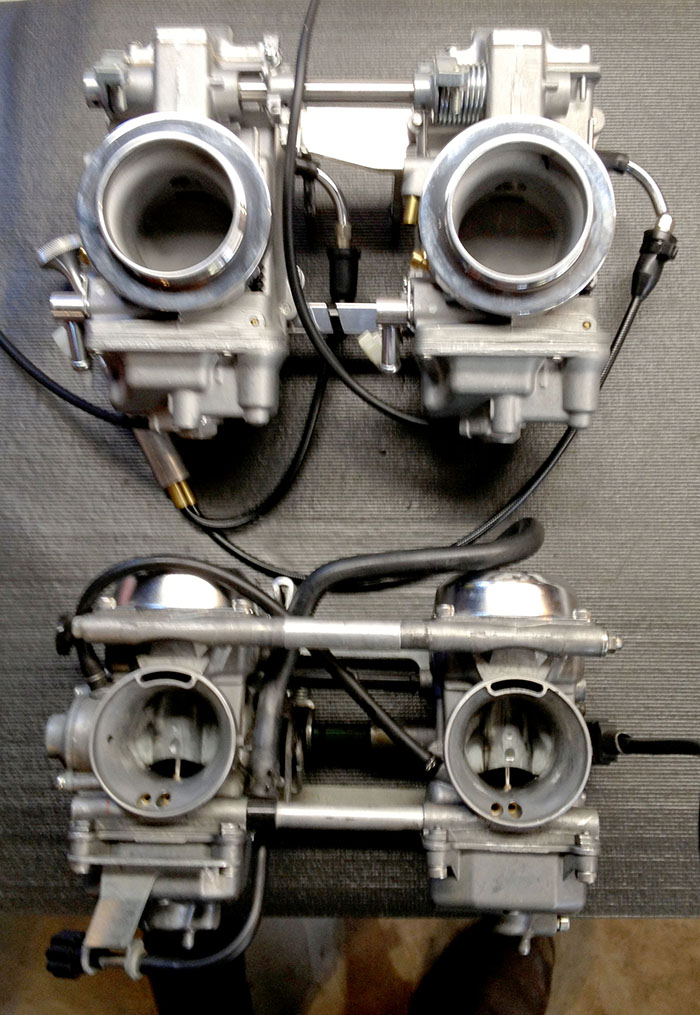 Size difference between Mikuni HSR42 and the Keihin CVK’s. 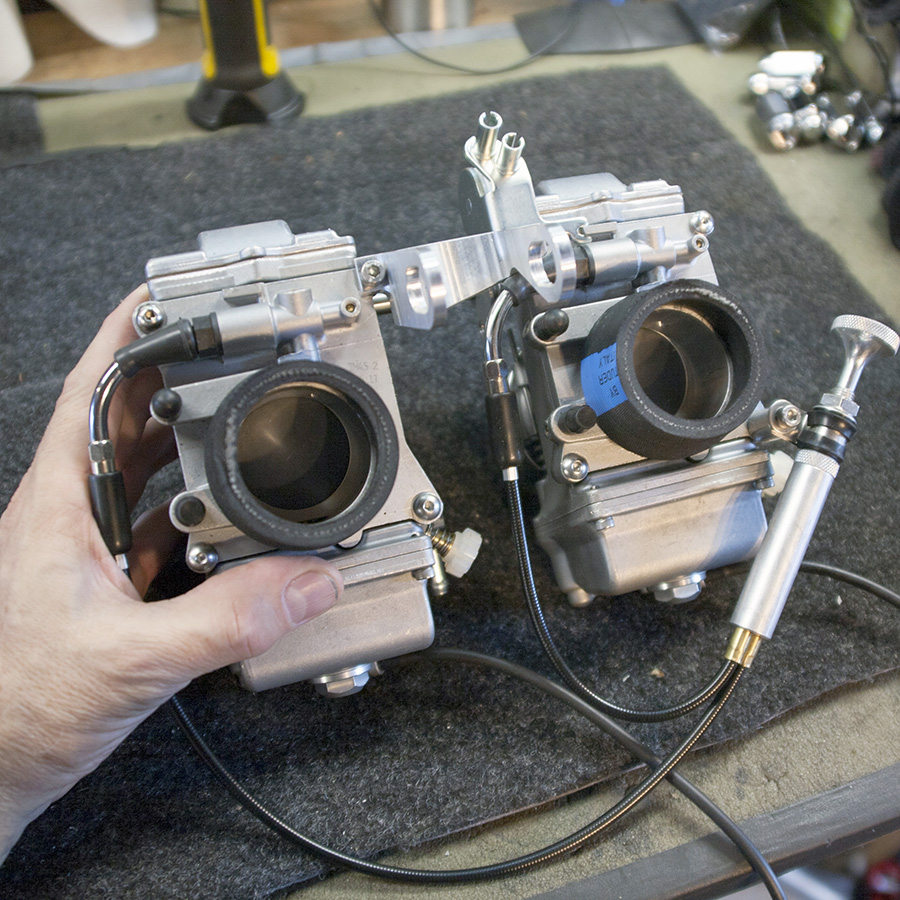 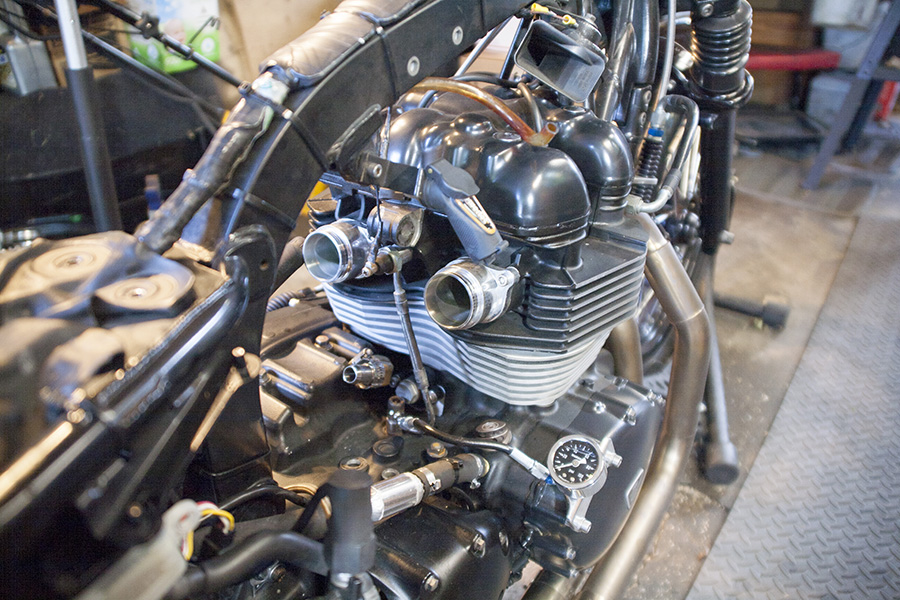 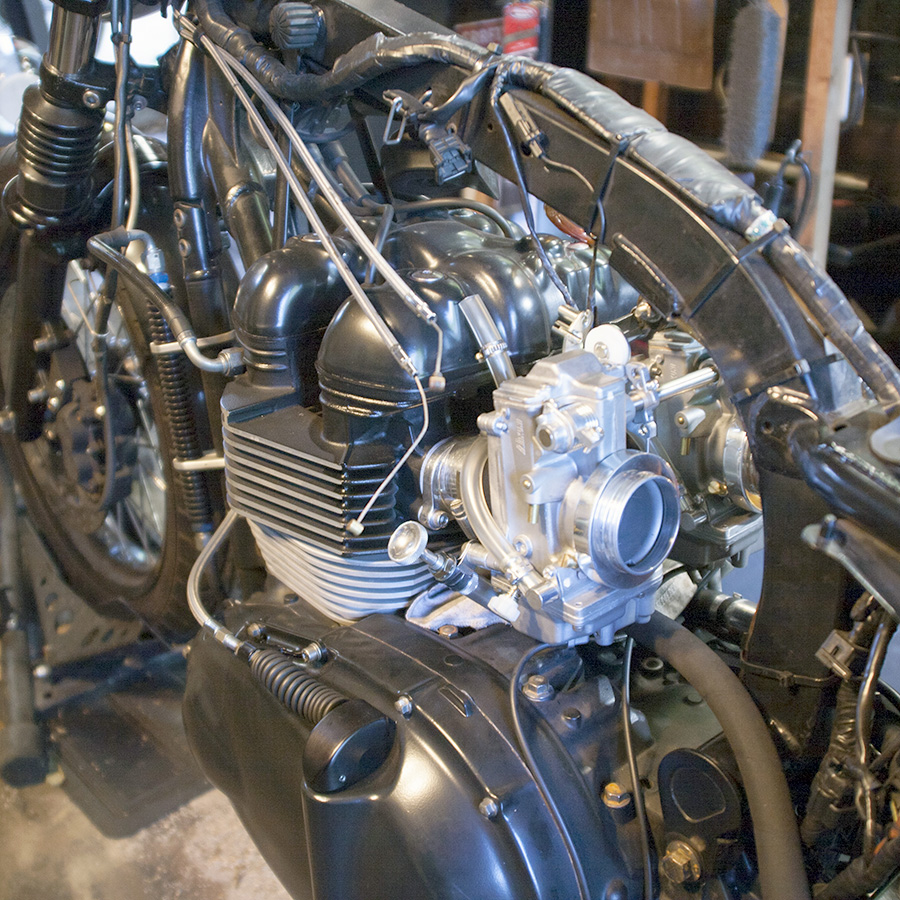 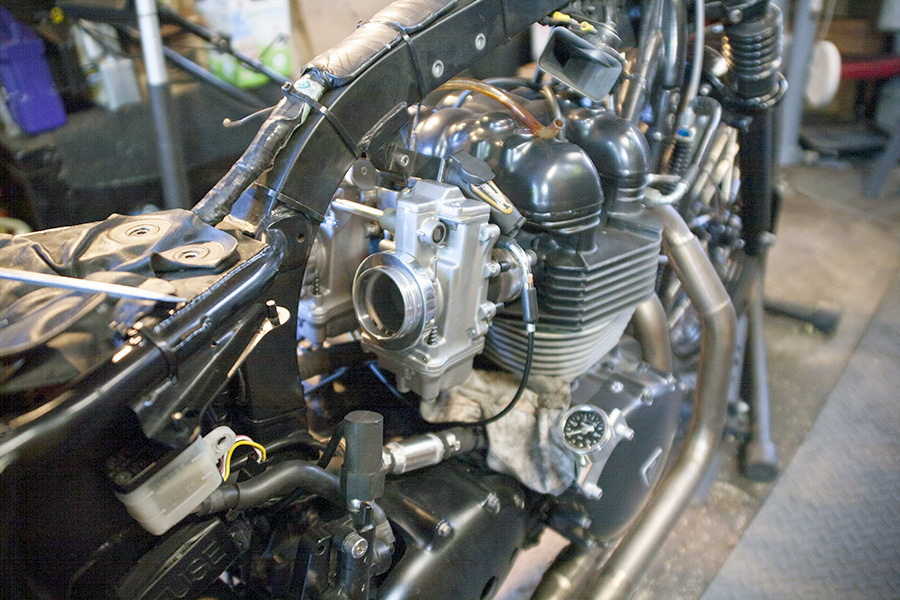 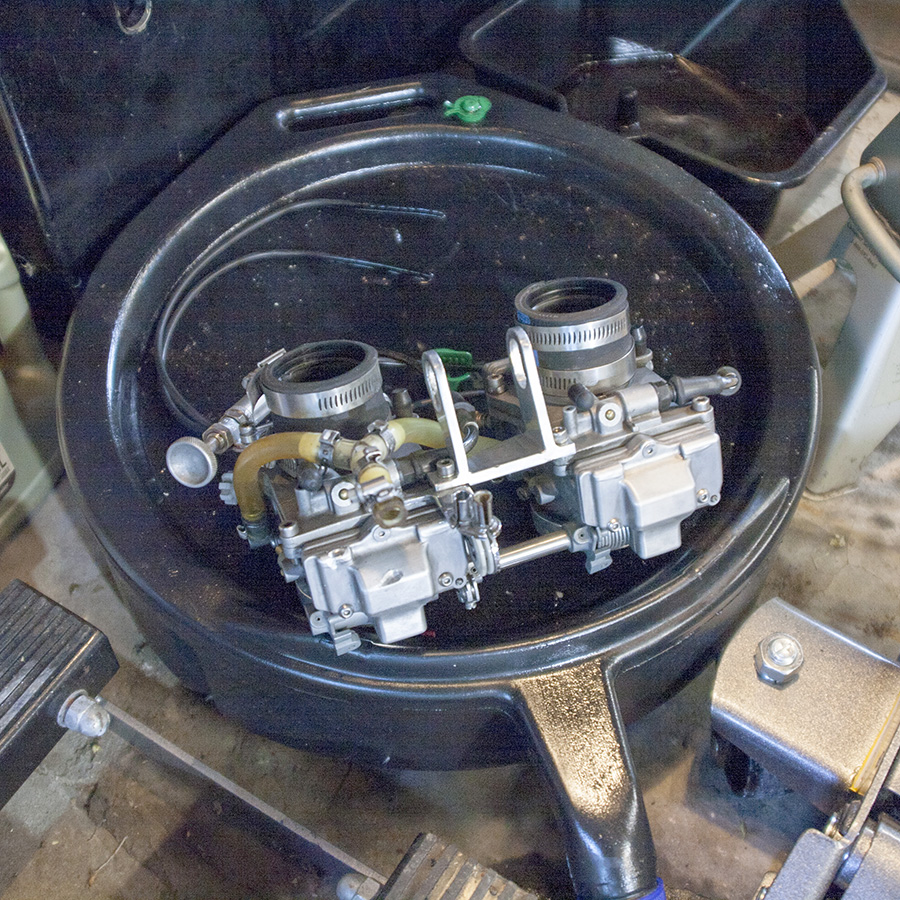 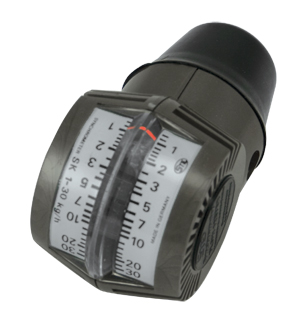