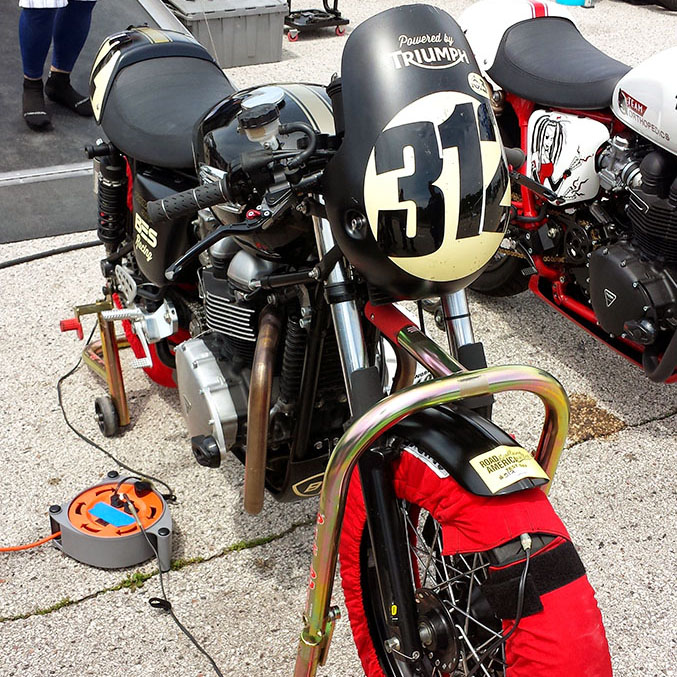 Like last year, the AHRMA Vintage Motorcycle Races are held over a long weekend in early June (JUN 6-8). This past weekend, I connected with 2 Bonneville riding buddies, Lee and Dan, to meet at the Lake-Forest Oasis early on Saturday morning, June 7, 2014. We gassed up and headed up I-294/94 towards Milwaukee, Wisconsin. Near the Milwaukee Zoo we stopped for gas and took the I-894 Bypass, exiting onto Highway 41 towards West Bend and the Kettle Moraine State Forest area. We missed our cut-off at Highway 45 and ended up in Fond Du Lac before we realized what we had done. So, cutting east across Highway 23 we finally arrived at Road America near Plymouth, WI, about an hour later than planned. 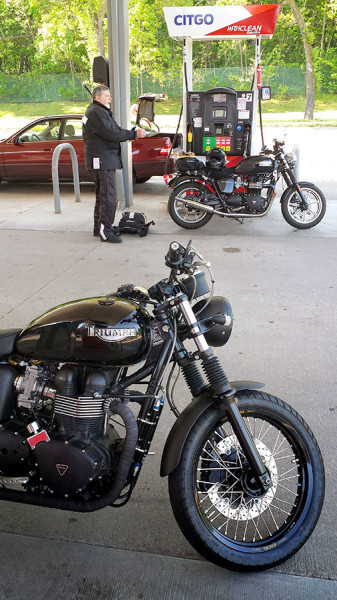 Gassing up near Milwaukee Zoo.

Once we got our gate passes for the day, and being thirsty and hungry, our first stop was the Gear Box for some early lunch and thirst quenching. Next we wandered through the Swap Meet area, then headed over to the Motoworks Chicago tent area. Motoworks Chicago owner, Johnny Scheff was there and invited us to hang out during the day as much as we wanted, and had a cooler full of cold beverages and chairs to sit on. We got a chance to chat with Johnny’s Aunt and Uncle, Jonathan, Paul, Sarah and a few others throughout the day. Great people! 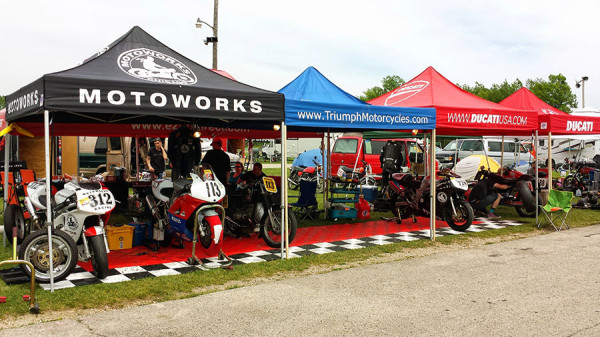 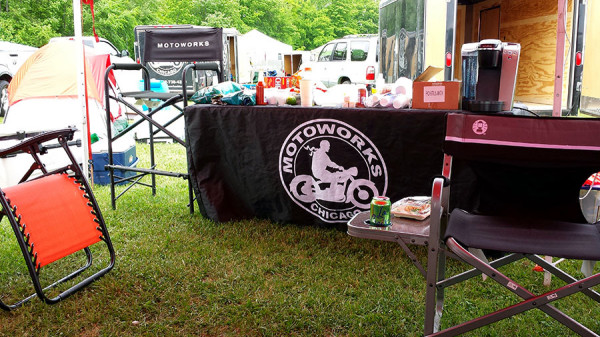 Johnny’s hospitality setup! A welcome respite after a long ride! 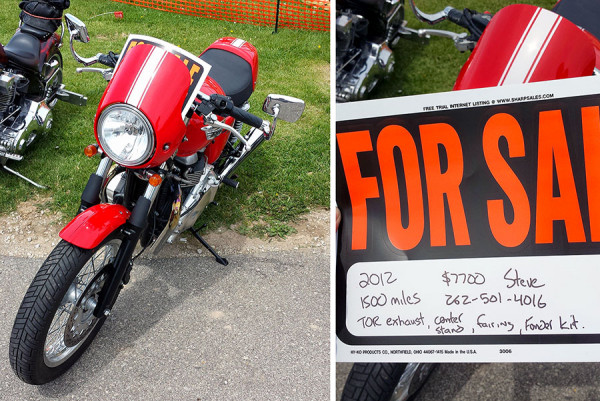 Lot’s of cool motorcycles around. Here’s a sweet 2012 Thrux For Sale! Tempting!

Next, we headed over to the pit area to see the Thruxton Cup Bonneville’s lined up for the race. 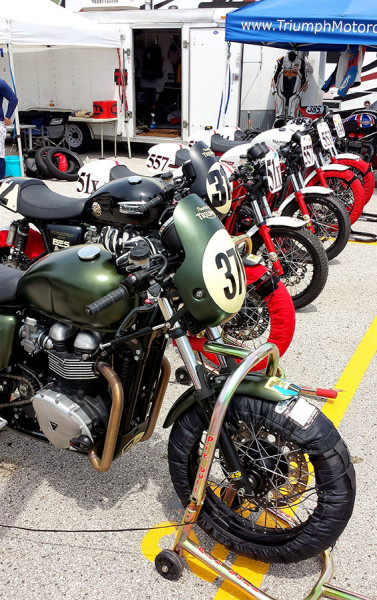 A heart-warming row of Triumph Bonneville Thruxton’s all race ready! 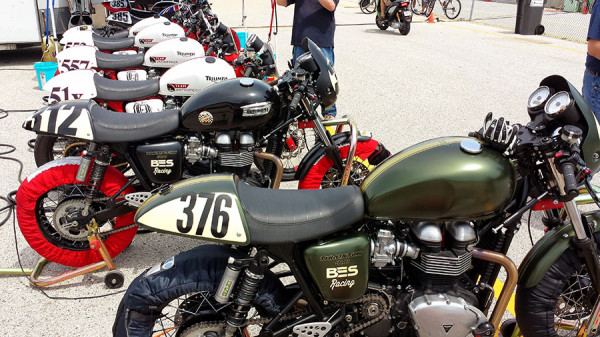 Thruxton’s lined up for the race. 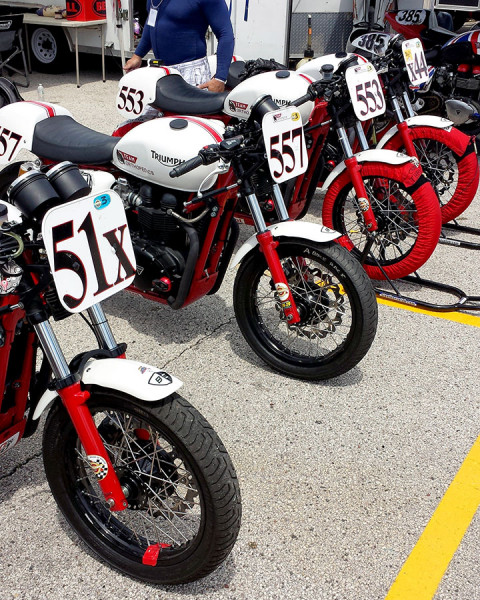 A group of Thruxton’s participating in the races are sponsored by an orthopedic surgeon in California called Team Orthopedic! All of them were built by British Customs. 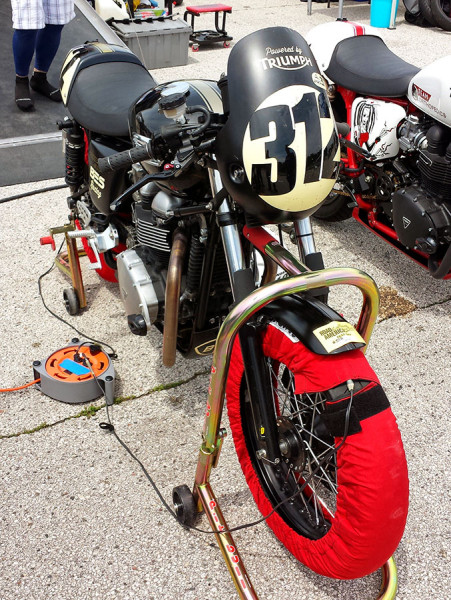 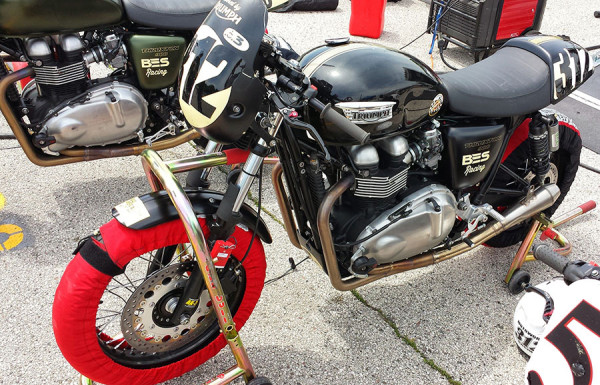 In case you were wondering, the tire warmers keep the tires at about 140 degrees F.

There’s Johnny Moto’s helmet next to this Thruxton. 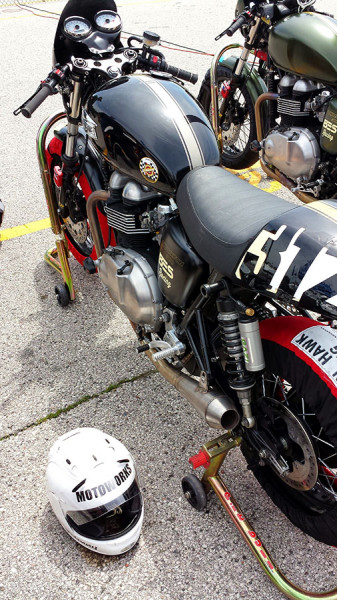 There’s Dan and Lee checking out the Thruxton’s with me. Dan rides a 2012 Bonneville T-100 Black, and Lee rides a 2012 SE Bonneville Black. Can you understand now why I ride with them? 🙂 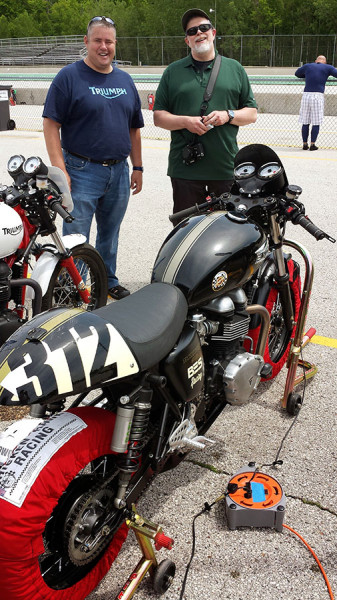 We learned that Johnny had wiped out at 90 MPH earlier in the morning during a practice run. The cause was that the tire warmers had not actually warmed the tires, so they were cold going into the first hard curve where he lost control. Here is the damage to the Suzuki he was riding. Thankfully, he was physically unharmed. 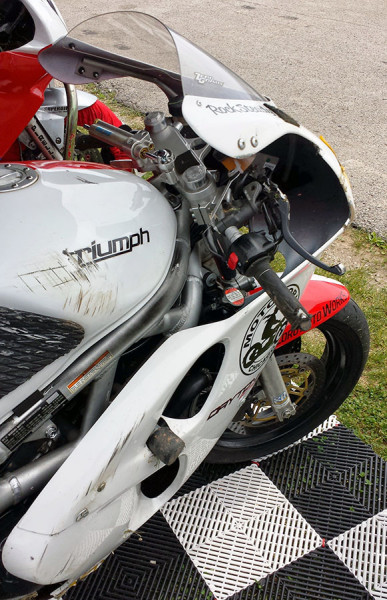 Johnny told us there was a couple grand in cosmetic damages to the bike. Good thing he has a paint shop sponsor… Loro Auto Works in Oak Park, IL!

Still has some grass and dirt to clean off! 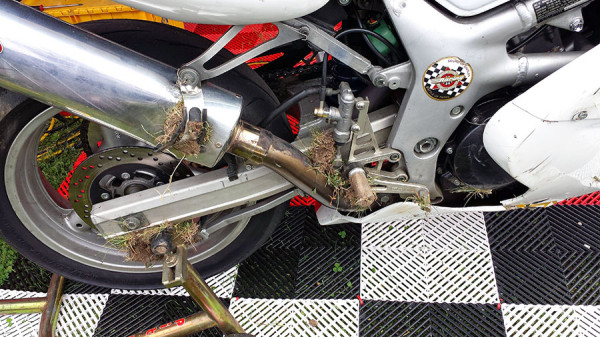 Johnny and Paul were also participating in a couple races with this old classic BMW with the air-cooled boxer engine! I think Johnny won his class last year on this bike. 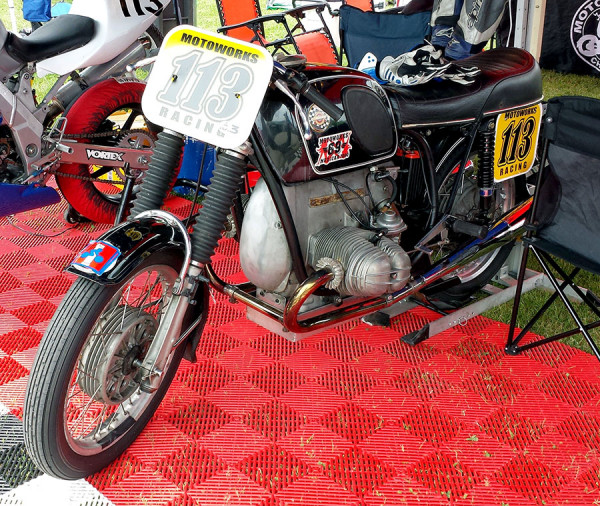 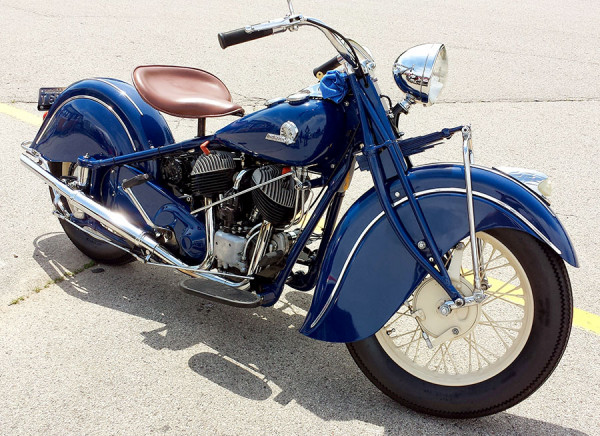 I had my eyes on this little guy for my grandson. I could’t figure out how I could get it home in my back pack, so I passed it up.

A Blata Pocket Rocket, 49cc mini racing motorcycle available for $500. These are generally available online in good used condition in the $400 to $500 range.

While walking through the Rockerbox bike show area I noticed Chris and Jake Brand eyeing the bikes as well. I did my first Slimey Crud Run with them last year. Good to see them both and catch up a little. I plan to see them in August at the next 4 Points Cycle Show on August 23, 2014. No doubt about it… Revival Cycles does very nice work! 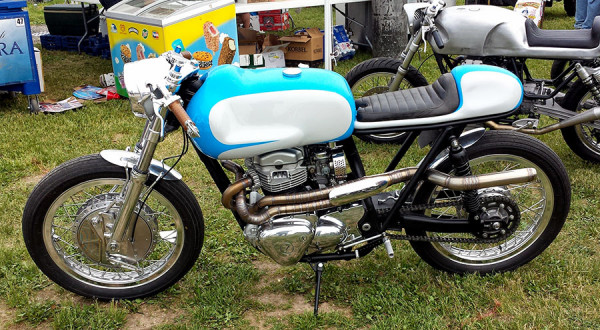 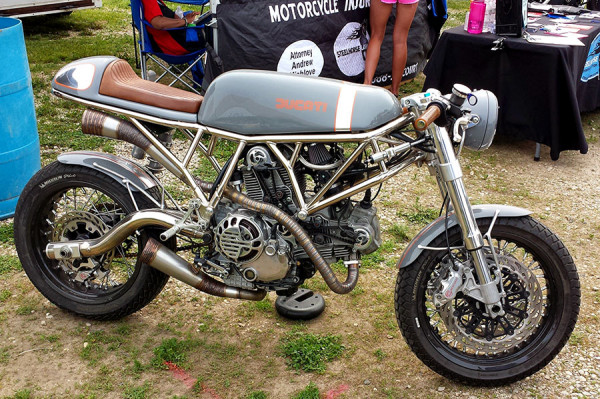 Johnny is a big kid always coming up with fun and crazy (in a good way) things to do. Here he is loading up the little paddock scooter with himself, Jonathan and Sarah to head over to watch Paul race on the BMW in Race 10. 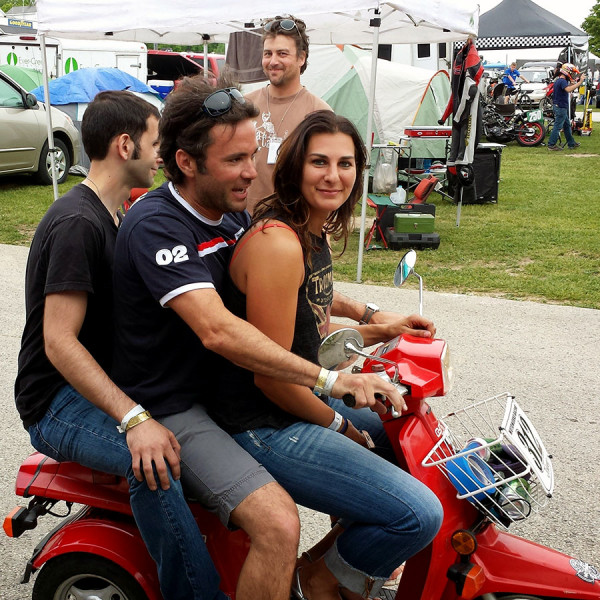 Lee had to leave earlier, so Dan and I headed back toward Chicago around 5:30 PM. On full tanks, we made it all the way to the Lake-Forest Oasis in Illinois. I think we were going faster than the speed limit because we made very good time. 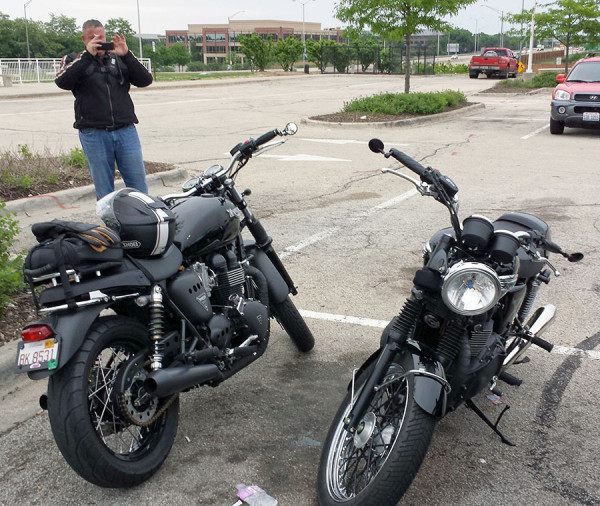 The weather was fantastic, the racing fun to watch, and the people we met great to be with. All of it added up to a fun day at the beautiful Road America race track.