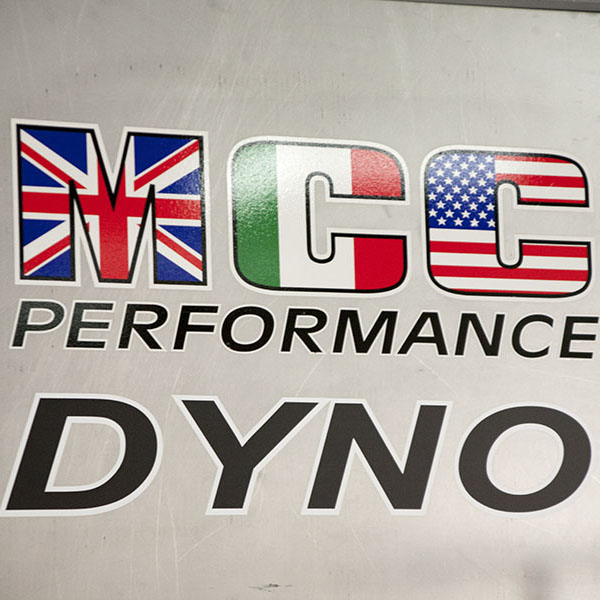 If you follow this blog, you know that the 2012 Triumph Thruxton I purchased from Bill in November 2014 already had these performance modifications:

Since I’ve owned it, I have also modified the airbox, installed UNI Pod filters and installed a Dynojet Power Commander (PC) module. With this setup, it was recommended to download and install the British Customs “tune” file and use it to tune the PC for this Thruxton. After installing the PC and this tune the Thruxton ran okay, but I noticed that my fuel efficiency was sub-standard at only 30 MPG.

I researched other tune options on TriumphRAT.net as well as with Johnny Scheff’s (Motoworks) friend Max Materne of The Transportation Revolution in New Orleans who have used the Power Commander on Johnny’s race Thruxton. I considered adding the Dynojet Auto Tune module, but Max recommended a custom dyno tune to really dial things in.

So, I contacted a local Triumph dealer called Motor Cycle Center in December 2014 and asked about their Dyno Tune process. Nick in the Service Department let me know they had a Dyno Tuning winter special going on, so I took my Thruxton in on January 24, 2015. The Chicago weather was pretty mild in the mid to upper 30’s, and roads were dry. I had been riding the Thruxton to work all the previous week.

I arrived about 9:45 AM and checked the bike in with Nick in Service. The Dyno Tune process was completely done and I left MCC a little after 12 noon.

MCC has a nice location and facility that they moved into a few years ago. The building used to be an auto dealership so there is a large showroom, service area, and a large parking lot! MCC is the oldest Chicago area Triumph dealer where I bought my 2008 Bonneville in June of 2008. MCC is also a: Ducati, Norton, MV Agusta, KTM and Husqvarna dealership. 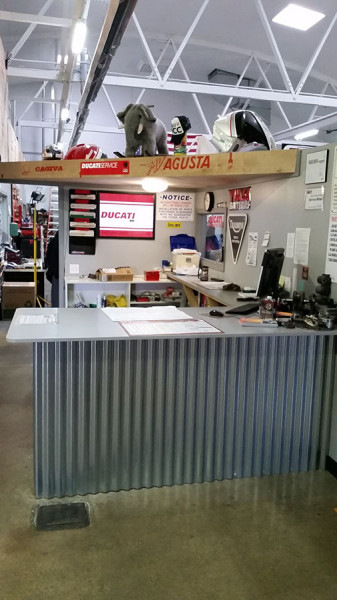 The Dyno is located in a soundproof room within their service area. MCC kindly allowed me to take photos of the process for this blog post. 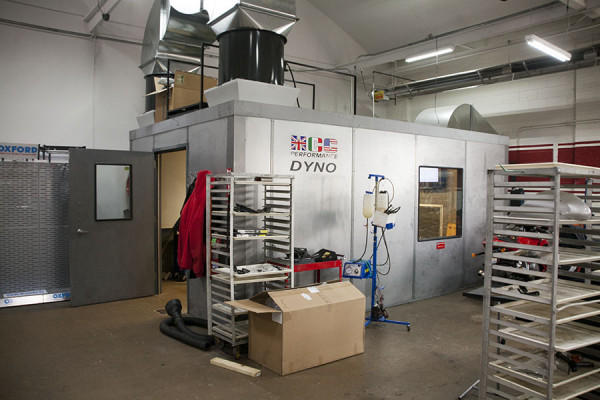 A couple service technicians loaded the Thruxton into the Dyno room and got it all setup. 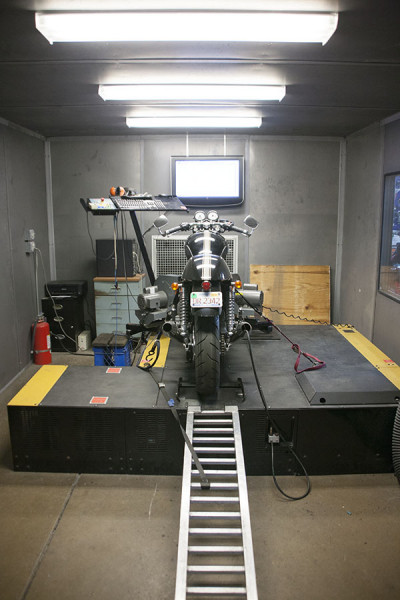 Thruxton mounted on the Dyno, ready to test. 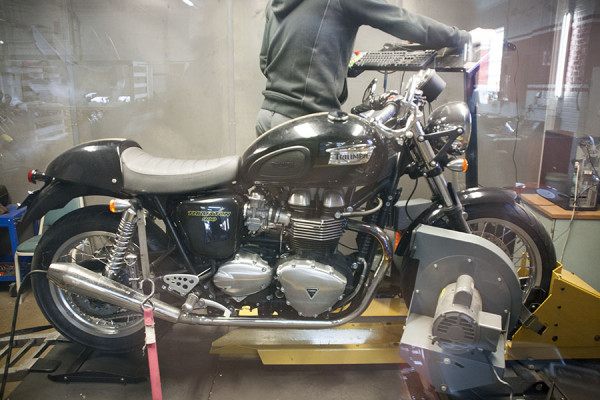 From a side window, I was able to watch the process. This is an extremely loud process! 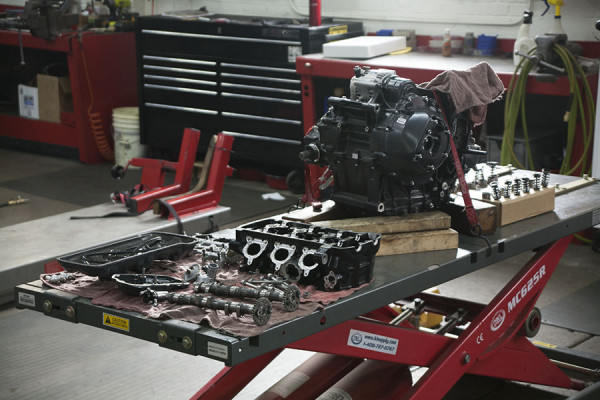 Random shot: An engine disassembled in the MCC shop. 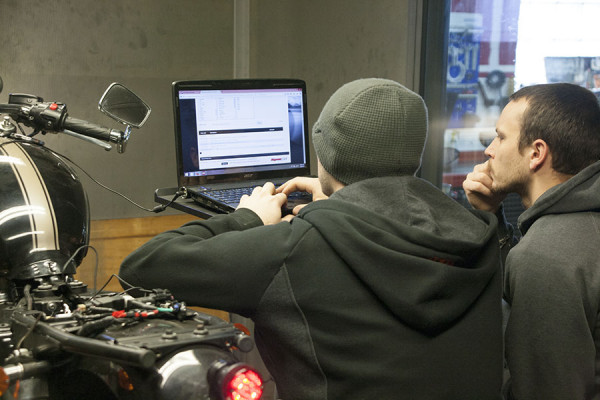 Aaron and another tech checking the computer readouts from the Dyno run. 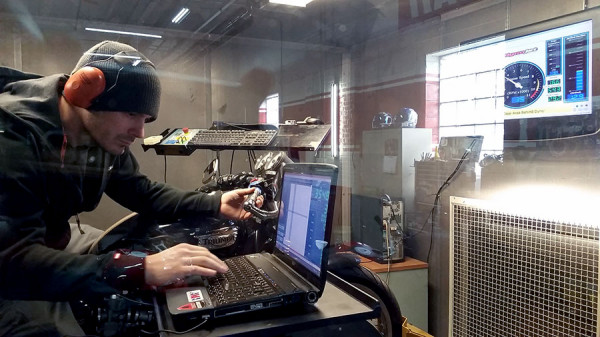 After the first run, Aaron told me that he discovered that the BC tune was pretty close at 50% throttle and above. However at throttle levels below 50%, especially right in my cruising range, the engine was running too rich. This explained my poor fuel economy. 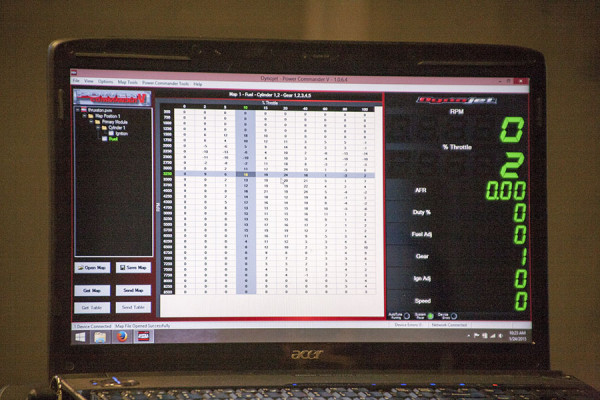 On Dyno runs 2 and 3, Aaron tweaked the tune map to optimize for an Air/Fuel mixture in the 12-13 range (performance), rather than where it had been around 10 (too rich). 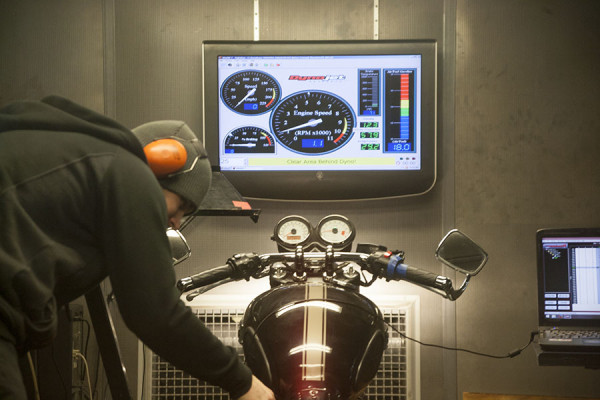 Aaron tweaking the tune for each Dyno run.

This produced this final screen and printout: 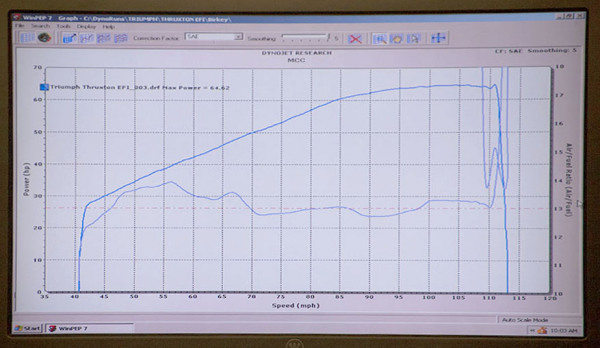 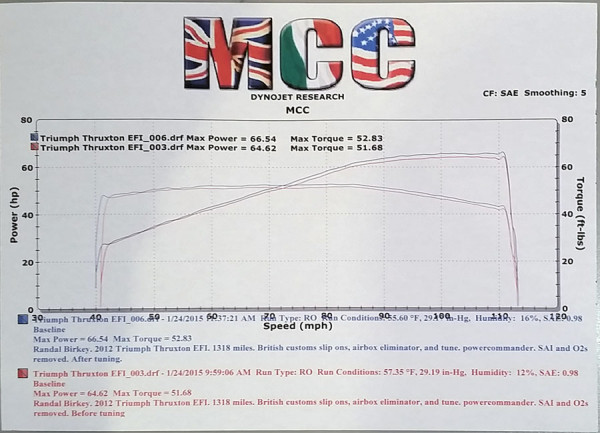 I had a great experience having my Thruxton Dyno Tuned at MCC. Everyone in the service department starting with Nick over email were very helpful and professional. Judging from the printouts and my ride home, Aaron knows what he is doing! I’ll post an update here after I’m able to measure my fuel economy. 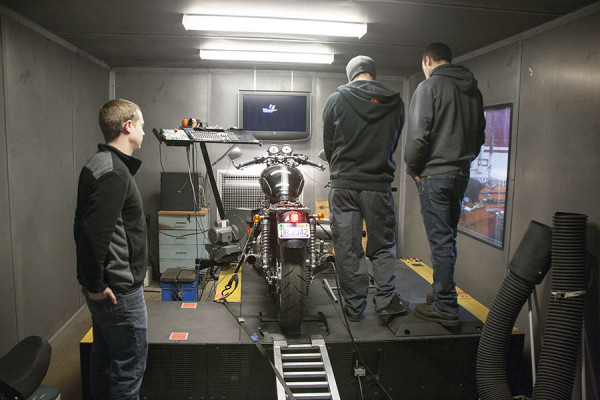 I would recommend any Triumph owner (or any motorcyle really) to consider using MCC either for a baseline Dyno run to know where your bike is, or for a performance tune after making modifications like I did. 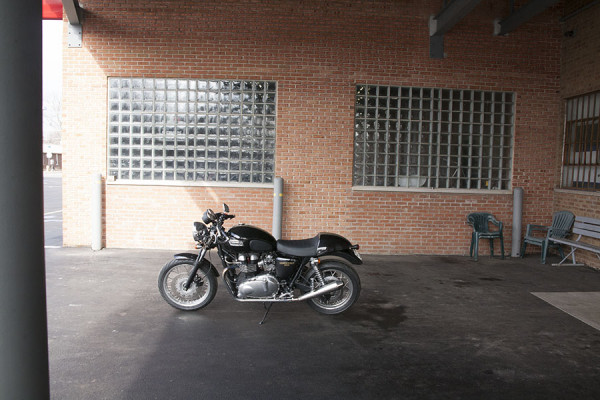 All Dyno tuned and ready to ride.

The weather in Chicago was milder today, near 40, dry and clear. So, I took the Thruxton for a spin that included some highway speeds in excess of 80 MPH (Ton-up!). On one stretch I burned .89 gallons and went 31.3 miles = 35.16 MPG. So, there is about a 5 MPG increase since the dyno tune, and probably better if I kept it under 70 MPH. Still, my ’08 Bonnie with 42mm Mikuni Carbs gets 40 MPG city and 50 MPG Highway! I am guessing it is because the 08 engine breaths even better and burns the gas more efficiently than the ’12 Thruxton.