Replacing and Upgrading to a Barnett Clutch 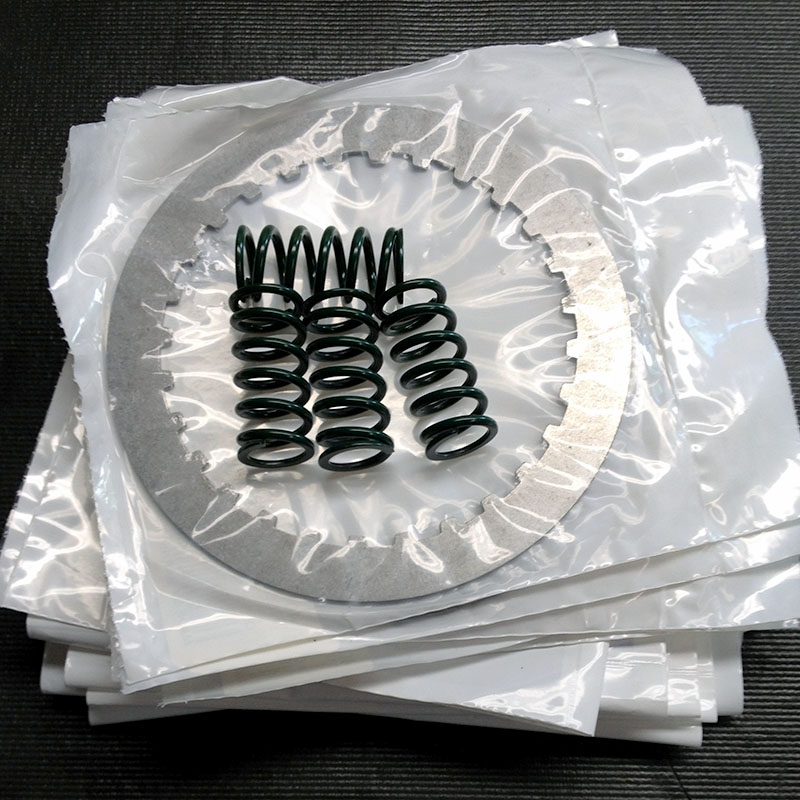 I decided that with 31,000 miles on my 2008 Triumph Bonneville, it was time to replace and upgrade the clutch. This was also influenced by the previous upgrade of a new Mikuni carb kit from Bonneville Performance which had noticeably increased horsepower and torque.

I purchased the Barnett clutch kit from New Bonneville, and discovered that it came with the gold springs. I was familiar enough with the discussion on TriumphRat.net to know that most experienced owners preferred the Barnett green springs. So, I asked New Bonneville if they would swap gold for green, which they were kind enough to do.

Step One – Drain the Oil

First I referred to my Haynes shop manual and made sure I had everything I needed for the project. 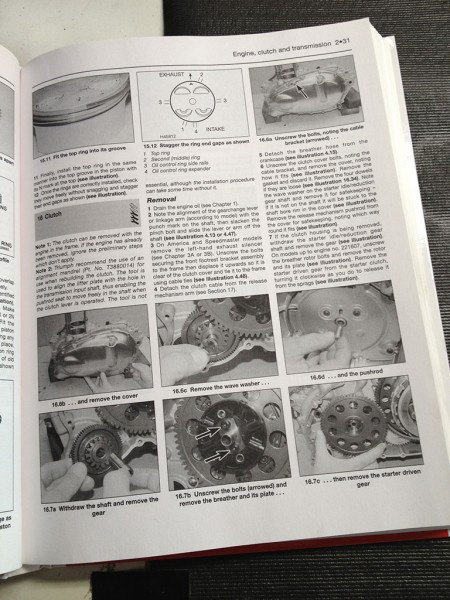 Then I drained the oil and got my new Motul oil and K&N filter ready. 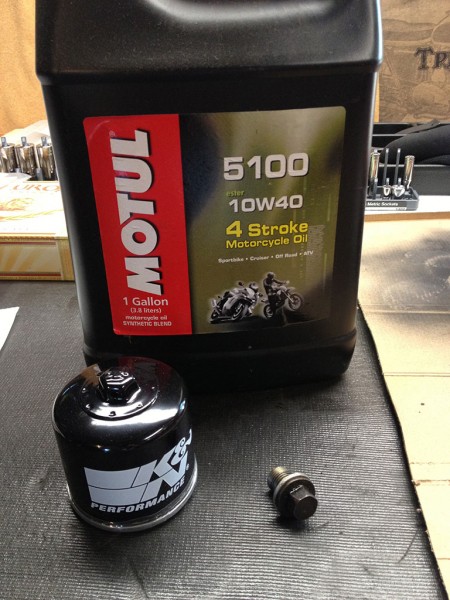 I also made sure I had all the parts to the clutch kit assembled and ready. 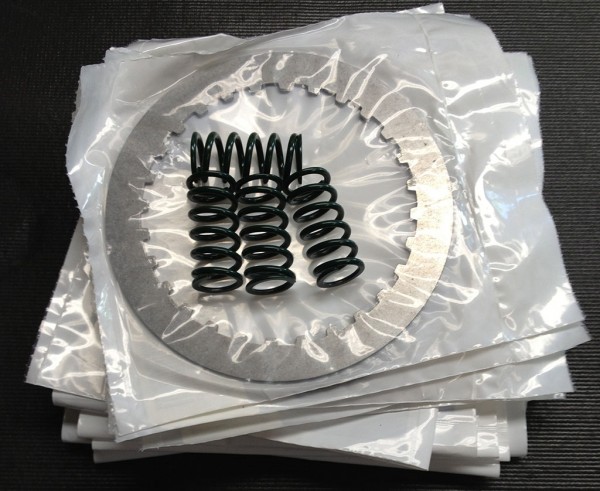 Next I removed the clutch cable and foot shift lever, and loosened the bolts on the cover. 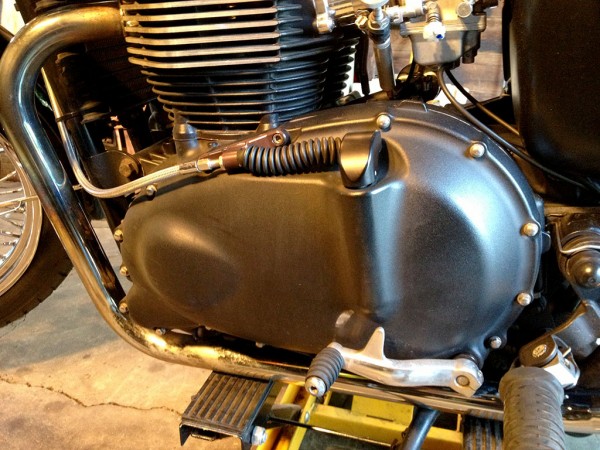 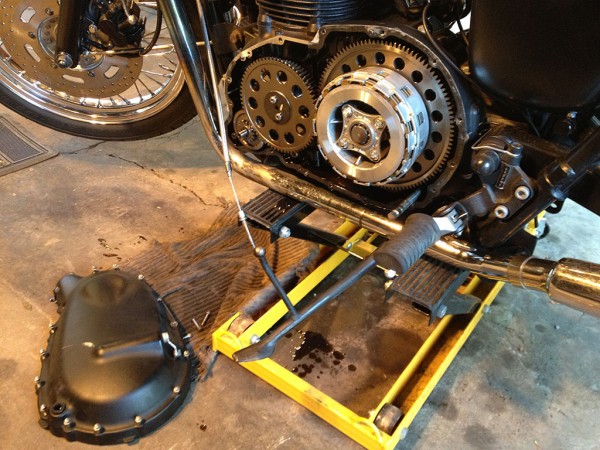 I removed the cover and as much of the gasket material as possible by hand. A lot of it stayed stuck pretty hard on the surface of the engine/transmission housing. This reality eventually proved to be the biggest challenge of the whole project. 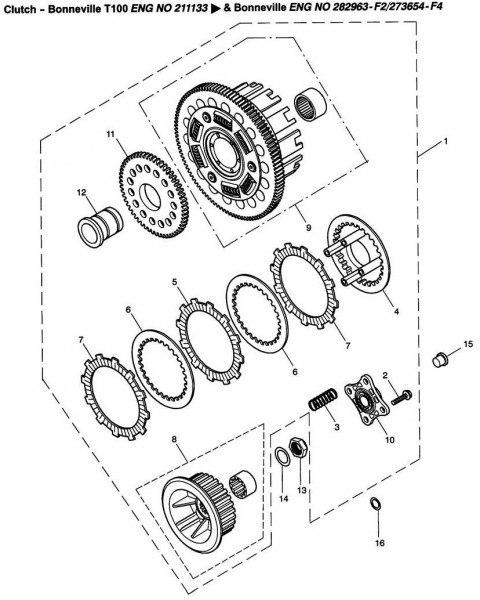 Next I removed the center clutch bushing (Part #12), noting how easy that was to remove. Followed by the 4 bolts (Part #2) that hold the clutch lifter plate (#10) that holds the clutch springs (#3) in place. Then the springs and the washers behind them came out. 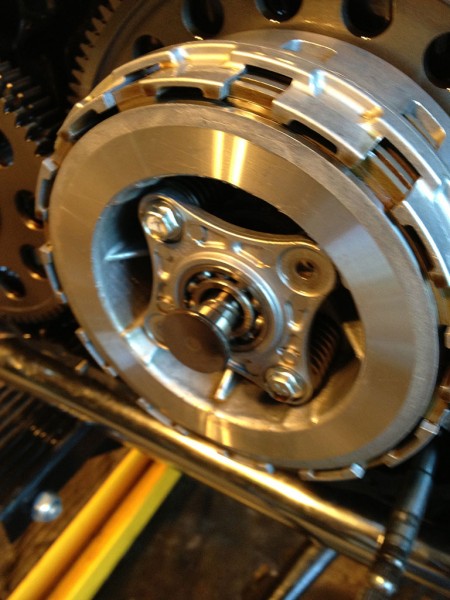 Next I used a large socket and a 1/2 drive ratchet to loosen and remove the center 22mm clutch nut that holds the clutch basket on the shaft. To get this nut loose required me to put the bike in gear and clamp down hard on the rear brake in order to get enough torque and leverage to loosen this nut (Thanks to Triumphrat.net for this tip!). 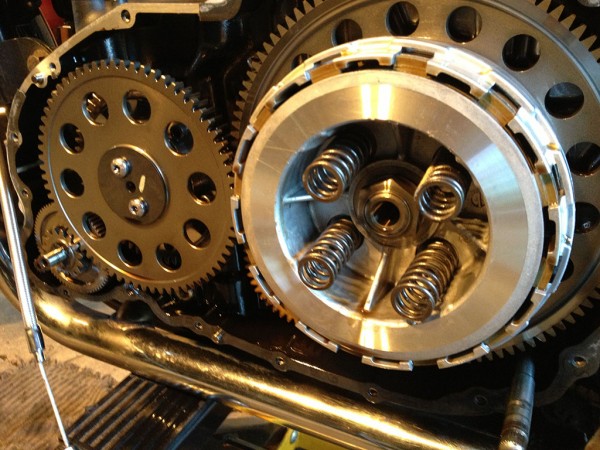 Clutch backet showing position of springs before removal and replacement.

Once removed, I was able to pull out the entire basket assembly of alternating steel plates and clutch plates. The part at the rear is the clutch pressure plate (#4) – see below. 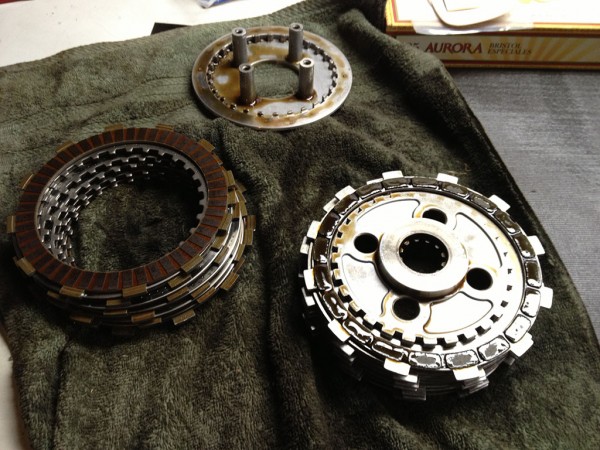 The next photo shows the outer clutch housing (#9) which was left on the bike after the clutch basket assembly was removed. 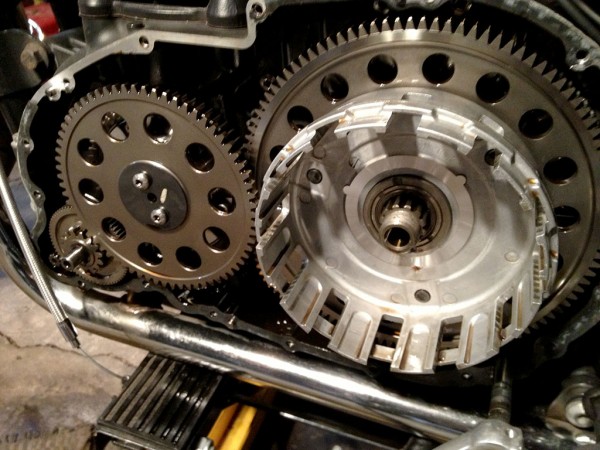 Next I stacked the Barnett clutch steel plates in an alternating pattern with the friction discs. There were 2 friction discs slightly different from the rest. I put these on the inner and outer most positions of the stack, with the ones that were the same in the center (again, many thanks to Forchetto on Triumphrat.net for this tip!). The entire assembly was then carefully reinserted into the housing already on the bike. The center 22mm nut was put back in place and torqued to 105 Nm.

Next I inserted the Barnett green springs in place over their washers and carefully hand started the bolts holding the clutch lifter plate (#10) over them. Then I evenly torqued these to 10Nm.

I put everything back together in reverse order following the Haynes shop manual. 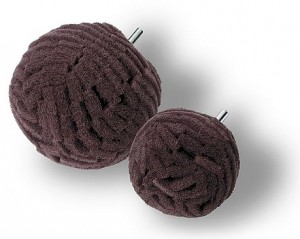 The most difficult and time consuming part of this job was getting the old gasket off of the aluminum gasket surfaces. I noted how many people on Triumphrat.net expressed caution about using metal scraper devices to do this, since they could easily gouge or nick the surface, creating leaks. I tried combinations of paint thinner, parts cleaner, plastic paint and body scrapers, wire brushes, Dremel tool, drill attachments, 3M Scotch-Brite polishing balls and yes even a few metal scrapers to get it all off and cleaned. This took several hours of slow, tedious work! I also had to protect and make sure pieces of the gasket didn’t stay inside the transmission housing. I used parts cleaner spray to keep things clean.

Step 6 – Side Cover and Gasket Installation

Once I had the old gasket off and the surfaces cleaned, I used small amounts of Permatex Ultra Black Silicone gasket material on both surfaces. I positioned the new gasket (purchased online from Bike Bandit) on the transmission housing and the silicone material helped to keep it in place. I made sure that the “wavy washer” that everyone on Triumphrat said to not forget, was in place, and the clutch release lever “bullet” shaped piece was also in place. Then I positioned the cover back in place, with the shift lever going through its seal properly. I hand started all the cover bolts and then torqued them down evenly to 9 Nm. This was followed by attaching the clutch cable assembly to the clutch release lever, and the foot shift lever on the shaft.

I added new oil to the engine/trans, checking to be sure there were no leaks. I adjusted the clutch hand lever to where I liked the feel of it. I looked over everything again, and then fired it up. The oil pressure was good and no leaks or weird noises to concern me. The test ride went well. I liked to positive feel of the new clutch even though it requires slightly more effort that the original. Back in the garage I checked everything again to be sure there were no leaks. I did the same thing the following morning before heading out to work. The job was done!