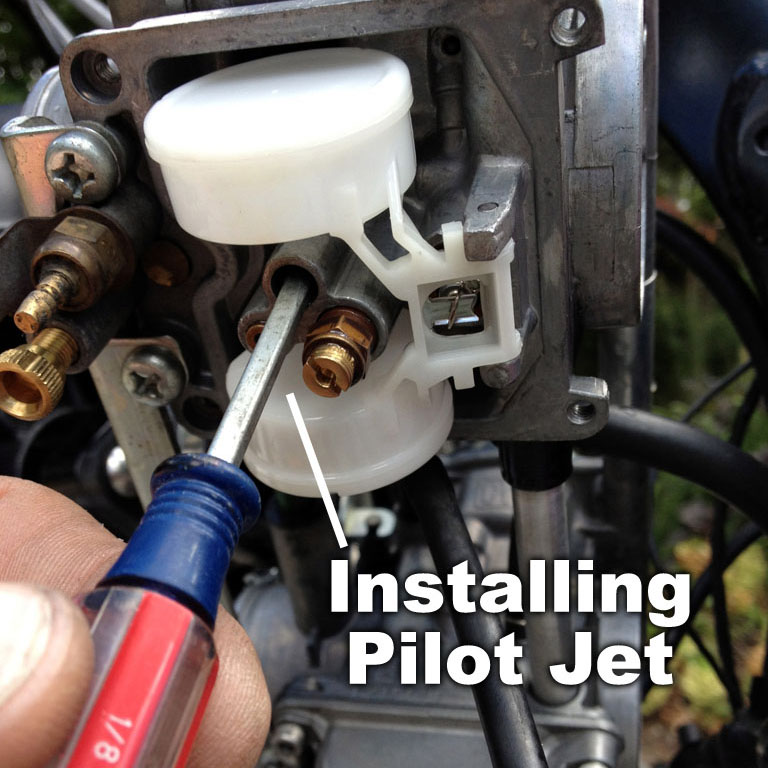 As I have shared in earlier posts, I’ve had to learn about re-jetting the stock Keihin CVK carburetors used on the 2008 Hinckley Triumph Bonneville because I modified the air intake and exhaust system. To take full advantage of these performance modifications, the stock carbs need to be able to breath more freely to allow for extra airflow.

Recently I decided to switch my carb needles back to the stock Bonneville, after installing and testing Thruxton needles for a month or so. Here are some photos I took during the process to help you understand the process better.

I jacked up the Bonneville on my floor motorcycle jack. I removed the seat, side covers, and then the gas tank. Next I removed the carburetor brace provided by British Customs in their Airbox Removal Kit. 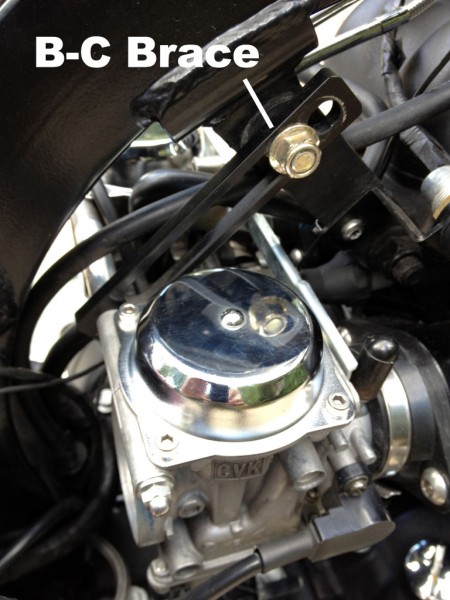 I disconnected the wires attached to the bottom of each carburetor. This was followed by loosening the hose clamps attaching the carbs to the intake manifolds… in my case the TPUSA billet manifolds. This allows the entire carb assembly to come off the engine and can be turned sideways on the left side of the bike. I found that a 2×2 wood placed between the transmission case and the carb assembly works well at holding it in place. 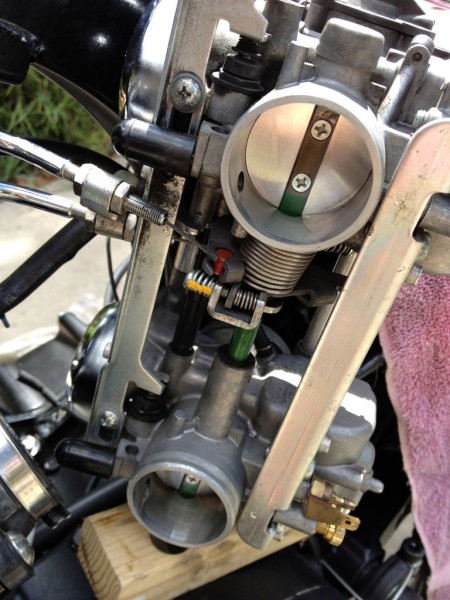 The next step was to remove the bottom float bowls. I use a 3MM hex wrench because I have replaced all the stock philips head screws with Stainless Steel ones from New Bonneville. These are much more rugged than the stock screws and allow for multiple on-off cycles without stripping. I use an old towel below the carbs to soak up the gas that spills out of the float bowls, when these are removed. 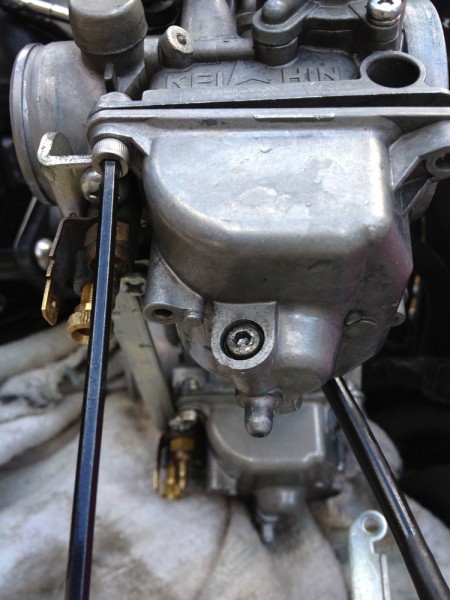 Here are a couple views of the carb bottom with the float bowls removed and call out to the various adjustment locations. 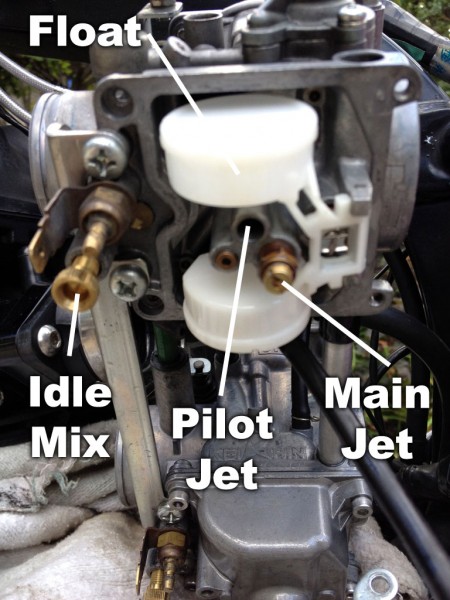 Here’s another view of the carb bottom with float bowl removed. 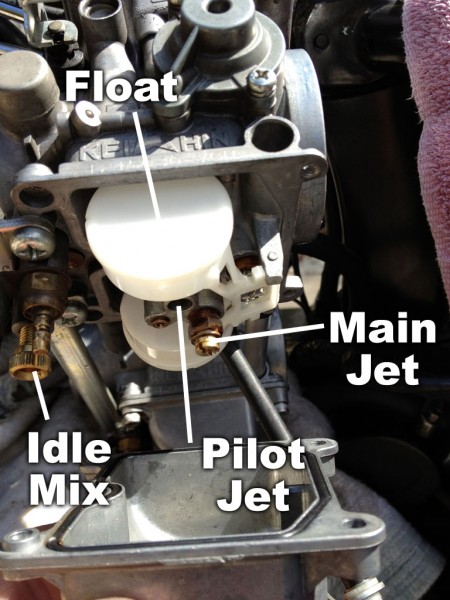 Another view of carb bottom with float bowl removed

Once this was done, I was able to access the main jets, pilot jets and idle mixture screw to install the sizes and settings I wanted to test. In this case I was only changing the pilot jets from size 40 to size 42. 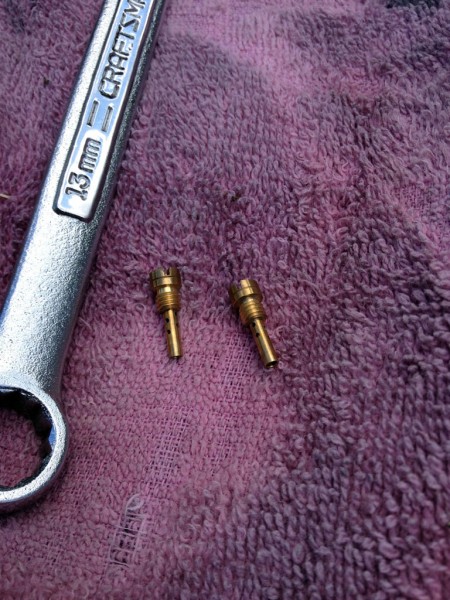 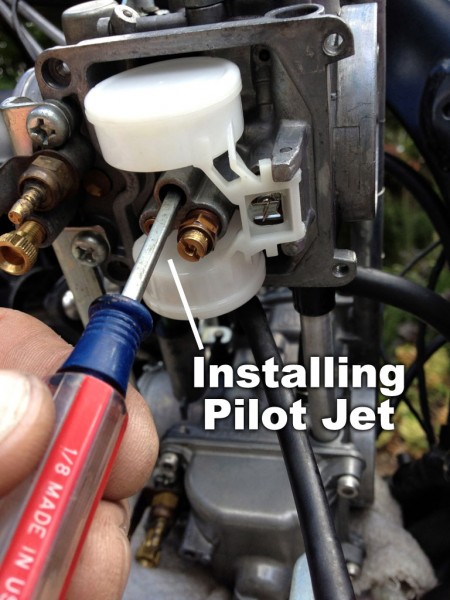 Installing the pilot jet with a small flat end screwdriver

Then the float bowl is reattached using the same s/s screws.

Although the idle mixture screws I have can be adjusted when the carbs are fully mounted, I prefer to adjust them at this point using a needle nose pliers with some tape to protect the brass. In my case, I was following the recommended 2.5 turns out. 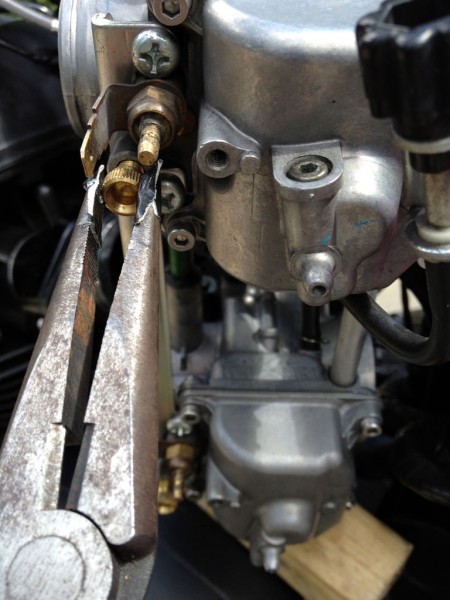 Adjusting the idle mix screws with a needle nose plier.

Now it is time to address the top of the carb, and in my case replace the Thruxton needles with stock OEM Bonneville needles.

First you remove the 4 screws holding on the diaphragm cover. It is important to know that you must hold the cover down while you loosen the last screw or the spring inside the carb may push the cover off unexpectedly, and you may lose or damage a part. 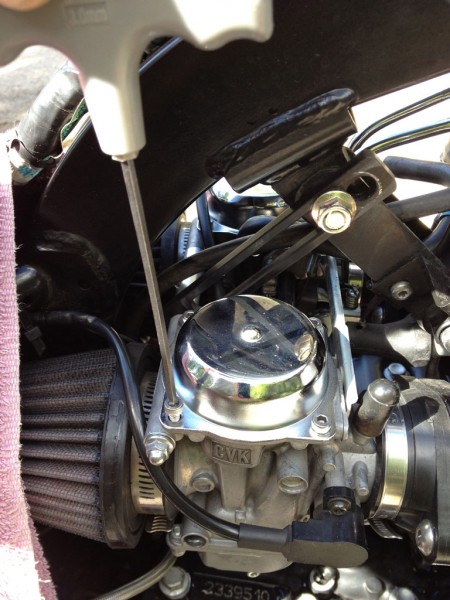 After the diaphragm cover is carefully removed, remove and carefully store the spring. Now it is time to remove the vacuum piston. I discovered that an easy way to do this and avoid damaging the rubber diaphragm is to insert a finger into the center hole until snug, then left the entire piston straight up and out. 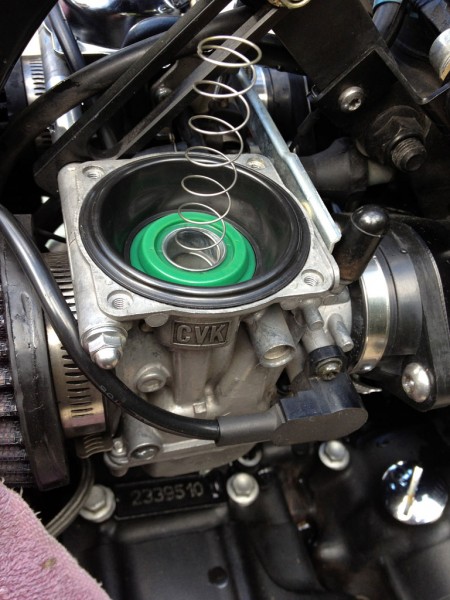 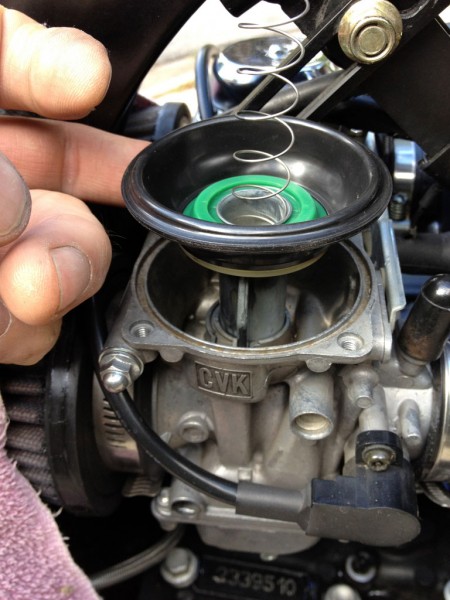 Vacuum piston shown half way out.

Once the piston is out, I removed the Thruxton needle, and replaced it with the stock needle. In my case I also left 1 shim on the needle. Here are the parts laying on my work bench. 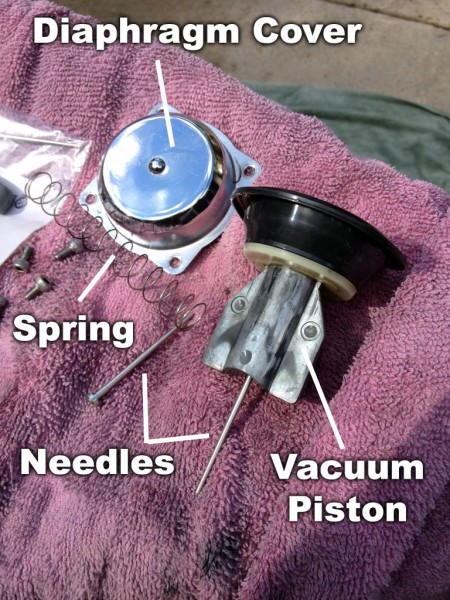 Once the needle was replaced, I inserted the piston back into the carb using the single finger method again. Notice in the top view of the carb (below) where I have indicated the hole where the needle will insert into the center of the main jet that was installed from the bottom of the carb. As the piston floats up and down, it raises and lowers the needle inside this main jet. This action is what regulates the gas flow into the carb. 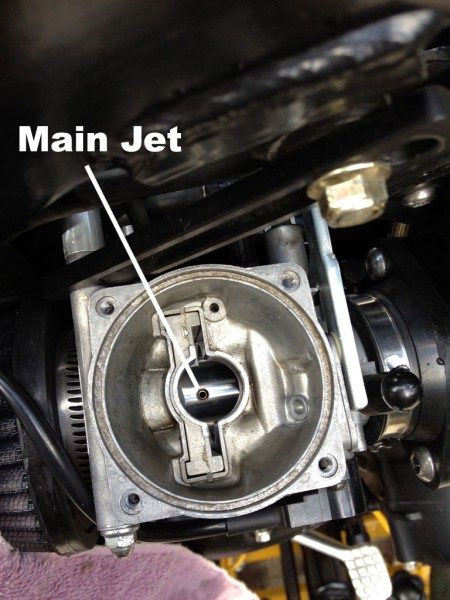 After the piston is back in place and seated correctly all the way around, it is time to reinstall the cover. Make sure you remember to tighten the 4 screws down the same amount. If one is a little loose, outside air will be pulled into the carb and it will run lean, causing the engine to not run correctly.

Here’s an exploded view diagram of the Keihin CVK carb for additional reference. 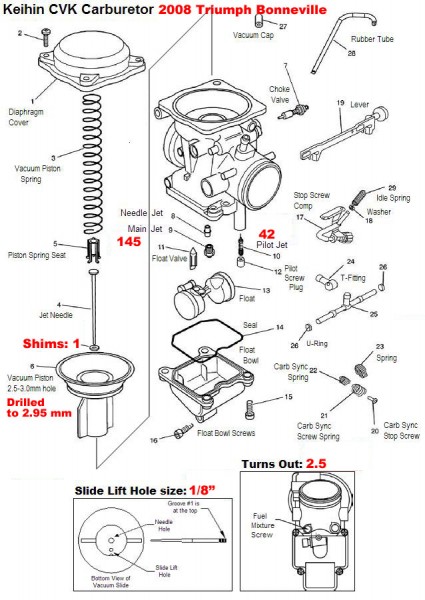 I hope this description and my photos will help you in your Keihin CVK carb modifications and adjustments. Let me know your experiences.