Well, after riding exactly 45,226 mikes on my stock Triumph Bonneville mechanical speedometer since June 2008, it finally bit the dust. I always wondered about it since the needle tended to be jumpy and it squealed a lot in cold weather, even after lubrication. My guess is that someone in the Triumph QA department was on a coffee break in 2008, and this unit should have never passed. 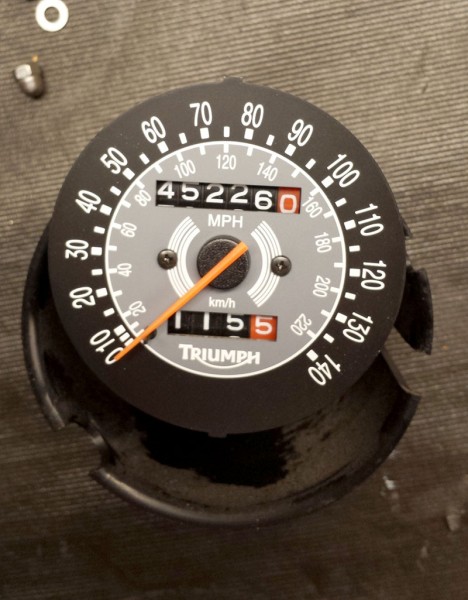 My OEM Triumph Bonneville speedometer, frozen in time at 45,225 miles

I checked with friends and online sources like TriumphRat.net and considered some aftermarket solutions such as the Acewell 2853, but they were all pretty expensive options, and I wan’t sure I would like the look. They would also require a different instrument panel setup, adding additional costs to the project.

In the end I used good ol’ Google to find a good used OEM replacement speedo from Rubber Side Up for about $230. It was from a wrecked 2008 Bonnie with only 4,805 miles on it. I also purchased a used speedo cable and gear unit for the front wheel (another $20).

The used unit arrived several days later (actually it arrived 2 days after it was supposed to, but once I let Rubber Side Up know this, they immediately refunded my shipping costs), the speedo swap and install went flawlessly in less than an hour. On the initial test run the needle was smooth as silk, and quiet! It’s a keeper!

Now, my only irritation is that I have to do mental math every time I want to add up my total miles. The formula is: current odometer reading + 40,500. Oh well, things could be worse.

Once I had the new (used) speedo in place and was confident it was working, I decided to tear apart the old speedometer to see what I could discover. It is a sealed unit, not designed to be taken apart and repaired, so I had to basically destroy the stainless ring that holds the front glass and rubber seal on the unit. Once that was pried off, and two screws removed from the back, and the trip odometer reset knob off, it came apart easily. 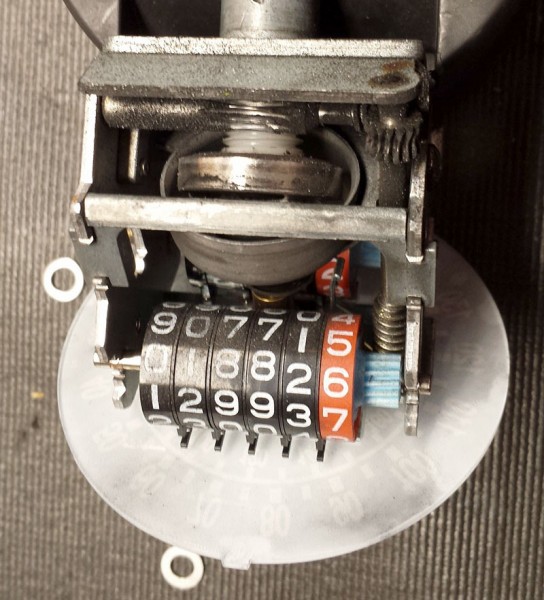 Aside from a lot of dust and tiny metal and plastic filings, there was nothing really apparently wrong with it. It will require more dismantling to figure out the real issue. 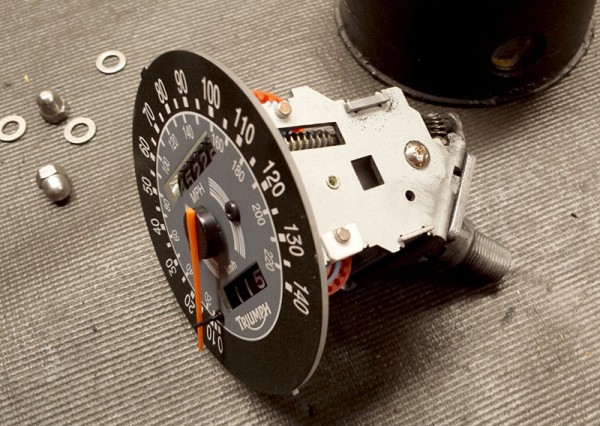 The guts of the speedometer removed from the housing – side view 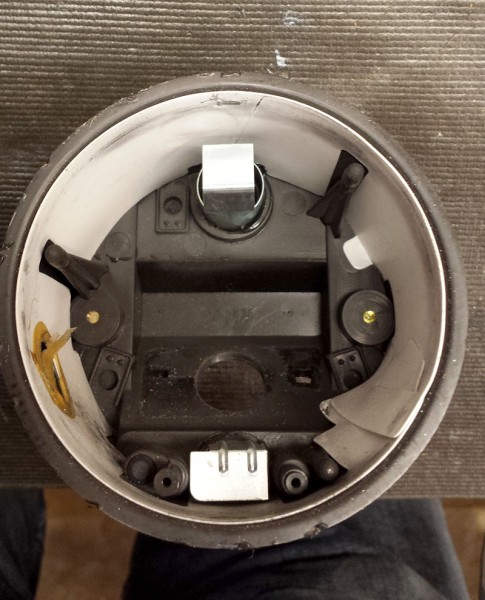 Open end view of the speedometer housing, with front face and guts removed. The large hole at the back is for the speedo cable, the hole on the left with the yellow ring is for the trip odometer knob. The silver plates deflect the speedo lighting bulbs.

My plan is to use this setup until this one wears out. At that point, maybe I’ll have a plan for converting to mini gauges and a custom instrument bezel fabricated by Seth Bernstein of D9 Brackets. Seth makes incredibly nice stuff! See more info on the New Bonneville Riders Forum.

What to do in a pinch for a speedometer?

My speedometer (not the odometer) gave out just before a planned road trip from Chicago to Memphis, TN, then on to Birmingham, Alabama for the Barber Vintage Festival. I remembered reading somewhere about a speedometer app for a smartphone, so I went to the Google Play store and found and downloaded a GPS based speedometer app called “MPH” to my Android Samsung Galaxy S4.

It worked great for what I needed – which was a simple large display of my current speed so I knew my speed. It turned out that my OEM speedometer was registering higher than what I was actually going… judging from what I had observed about my speed relative to RPM. Basically with my current gear setup (19 front, 42 rear) in 5th gear, at 4,000 RPM, I am going 70-73 MPH. At 4,500 RPM I’m doing about 80 MPH, and at 5,000 RPM doing around 90 MPH.

← Avon Versus Pirelli How an Internal Combustion Engine Works - Infographic →