As I have shared on a number of previous posts, I have been on a journey to find the optimum carb tuning setup for the stock Keihin twin CVK carbs that are standard on the 2008 Triumph Bonneville. The reason for this journey is that I have made changes to both the stock air intake system and the stock exhaust system which necessitates that the carbs be adjusted or re-tuned.

Specifically, the mods I have made are:

Most of what I have done to date to the stock Keihin CVK carbs has been based on a document published by Jenks Bolts, a British motorcycle shop (Jenks Bolts – Tuning Notes for the Triumph “Modern Classic” Family of Motorcycles – FEB 2007). Their tuning solutions involve using various sizes of Keihin jets, and either stock OEM Bonneville or Thruxton needles, and drilling the slides.

See these past posts for more details and photos on what I have tried:

Using their document as a guide, the best carb tune setup I had arrived at for my particular 2008 Bonnie was as follows:

This setup runs pretty good for me. However, in reading various online forums on Triumphrat.net, I had noticed a lot of people liking the Dynojet system. So, I purchased the Stage 1 kit from New Bonneville. As I read the instructions, I realized that the Stage 1 kit was not intended for Bonneville’s that have had the extent of modifications that mine has (see image below). 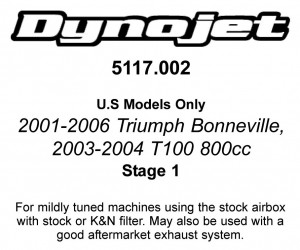 I went to the Dynojet website and saw they made Stage 2 and Stage 3 kits that sounded like they would be a better fit for my setup. Further investiagation revealed that they do not make Stage 2 or 3 kits for the Bonneville.

So, I emailed Dynojet about this issue and Mike Cory in their Research & Development department responded. He told me the The Stage 1 jet kit should still be a good starting point, but that I would need to use larger main jets than what were supplied in the kit. With the K&N pod filters he suggested that I would need main jets in the DJ140 range.

Mike told me that the Dynojet jet size/number designations are roughly equivalent to the Keihin size/number system. So, a DJ140 is about the same size as a Keihin 140, which I had already.

Which Springs to use?

I was also unclear about what to do with the Dynojet springs which are not as stiff as the stock springs. Again, in an email reply, Mike suggested that I might try the stock springs, and then compare the performance with the Dynojet springs. He told me that the spring determines when the slides will lift, and the lift (slide) holes determine how fast the lift happens.

So, I decided to test the Dynojet Stage 1 Kit conversion on my Keihin CVK’s with the suggested modifications for my setup and see what the results would be.

I went through the normal procedure to remove the seat and gas tank, in order to get at the carbs. I removed the carbs from their mounts to the intake manifold so that I could easily access both the bottom and top of the carbs.

Finishing with the carb tops, I removed the covers, then the springs and then the slides. I removed the Thruxton needles and shims and replaced them with the Dynojet needles.The interesting thing about the DJ needles is that they have 4 grooves at the top end where small “E-clips” can slip snuggly into. I installed my “E-clips” in the 3rd groove from the top, per the instructions below.

I then added two shims (tiny washers) over the “E-clip” per the instructions in Figure A and inserted these in the slide, and the slide back into the carb. I decided to try the DJ springs first, so I also replaced the stock springs with the DJ springs, and then reinstalled the carb top covers.

I then put the motorcycle back together in reverse order… carbs, filters, gas tank, seat, side covers.

The results of using the Dynojet parts

I have to say that this newer setup with the Dynojet needles, shims and springs performs better for me than my previous setup. I have noticeably more power at the low end, and above 4000 RPM I still get a stronger “pull” when accelerating. I did have to adjust my idle screws out another 1/4 turn from the suggested 3 turn starting point to get the best idle,

I may try changing the “E-clip” position per the troubleshooting instructions to improve a slight hesitation I sometimes get when accelerating hard above 4000 RPM.

Even though this experiment didn’t go as smooth as originally planned due to lack of correct information, I am happy that I persevered, got the information I needed and gave it a try. I would have to say that Dynojet seems to know what they are doing as I am initially impressed and pleased with the performance of their kit. Time will tell if this holds true.

I have replaced the Dynojet springs with the stock Triumph/Keihin springs. The initial sensation was that it performed a bit better. The acceleration seemed smoother to me. I also adjusted the idle mix screws out another turn (4x) to get the best all around balance.

As of today, this is the best setup I have experienced. The idle is smooth, acceleration strong, response very quick, and a lot if power in the upper RPM’s.

I can wholeheartedly recommend the Dynojet system.

Per the helpful comment below from Michael Cory at DynoJet, I have corrected my description about where the “shims” are placed on the DynoJet needles. Unlike stock needles, the shims go “above” the C Clip with the DynoJet system. I apologize to any I may have mislead about this detail – especially Leif! (See his comment below)

Lesson: It pays to follow the instructions, even when it isn’t intuitive or what you expect based upon other experiences!

I made this correction on my Bonneville last night and so far, so good. It fired up right away and seems to deliver as good or better performance on my machine than when I had them installed improperly. I still have a rough idle, but I believe that is caused by other issues I am currently tracking down (new coil and wires coming).

Since I corrected the shims position in my CVK and Dynojet setup on April 3, the Bonnie has run better. However, I noticed that it would “cough” between 2000 to 3000 rpm, mostly on deceleration, or when cold.

So, I decided that my stock size 40 Keihin pilot jets might be too small for my application and I swapped them out for size 42’s. Wow, what an improvement! I had been monitoring my gas mileage for a week and the best I could get were to mid to high 30’s. Yesterday, after this pilot jet swap, I got 43 MPG on my first ride, and that is in addition to much better performance.

So, my current awesome setup is: