Mikuni Carbs for the 2008 Bonneville 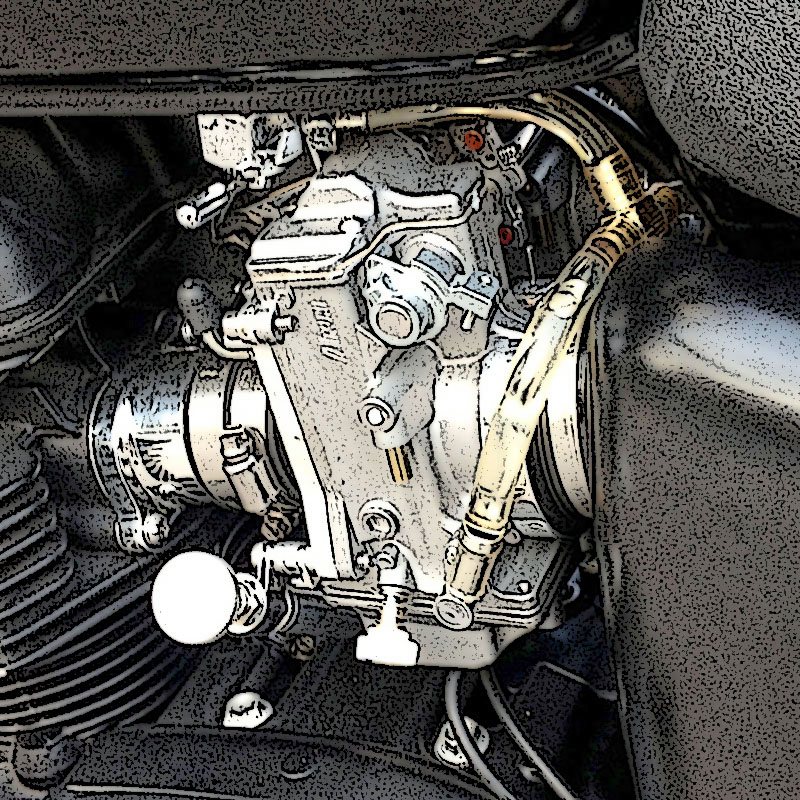 Even though I have my CVK’s working better than ever, there is still some roughness at idle and difficulty cold starting. Lot’s of people upgrade using the Keihin CR’s or FCR’s. However, I noticed some also use the Mikuni’s. So, in anticipation of spring and the desire to have an uneventful summer riding season, I began researching carb upgrades for the 2008 Triumph Bonneville.

How I discovered Bonneville Performance

I discovered Bonneville Performance online after seeing this street tracker at an International Motorcycle show in Chicago. I was so impressed with how it looked and the performance it was capable of that I went home, found their website, studied their products and services and bookmarked the site for future reference. 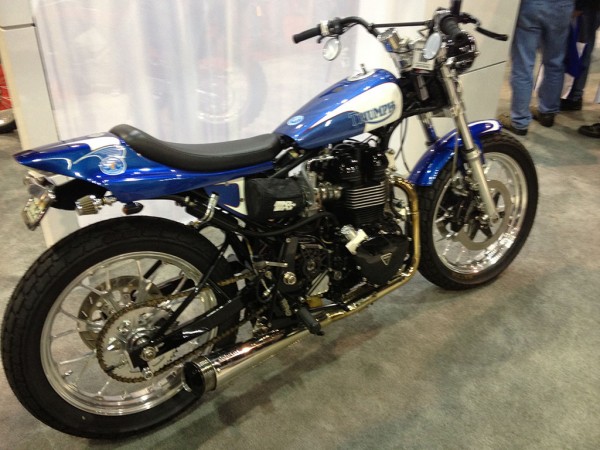 So, when I started thinking about carb options this spring, I remembered being impressed with the carb kit offered by Bonneville Performance. On his website, Bill Gately claims that his Mikuni carb kit will raise torque and horsepower 30% and that he has the dyno results to prove it. He also notes that his kit includes an enricher/choke which he has custom designed. The Keihin FCR’s have 7 jets and adjustments, and the Mikuni’s only have 3 jets with an idle screw and air screw. I like that. I also like that if I ever install a Wiseco big bore engine kit (also sold by Bonneville Performance), I can still use the Mikuni’s.

The 800GT Carburetor kit was specifically developed for the new series Triumph Bonneville’s. The kit is designed by and manufactured exclusively for BONNEVILLE PERFORMANCE. It consists of twin 42MM HSR Mikunis (pre-jetted for your bike), CNC machined billet manifolds, airbox adapters, and top and bottom braces. It also includes O-rings, throttle control rod for carbs, all fasteners and throttle cables. A single pull twin cable choke is also available. The billet pieces can be ordered chrome plated, highly polished or matte finished. The carbs can also be ordered in matte or highly polished finish.

This paragraph really jumped out at me:

If you are tired of erratic idle sped, sluggish response and general unpredictable behavior of your stock CV’s, this kit is your answer to a rock solid performer at low, mid and top end range.

Here is some additional information on the Mikuni HSR42 carbs themselves. 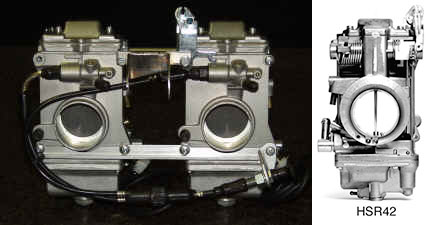 I will be describing and documenting my entire carb kit conversion experience here in this post. Bill Gately at Bonneville Performance has been very helpful and accessible in answering my questions and coming up with a slightly altered kit solution to better fit my needs.

The Mikuni carb kit arrived on April 19, 2013 via USPS Priority Mail. The shipping box appeared to be in good condition. 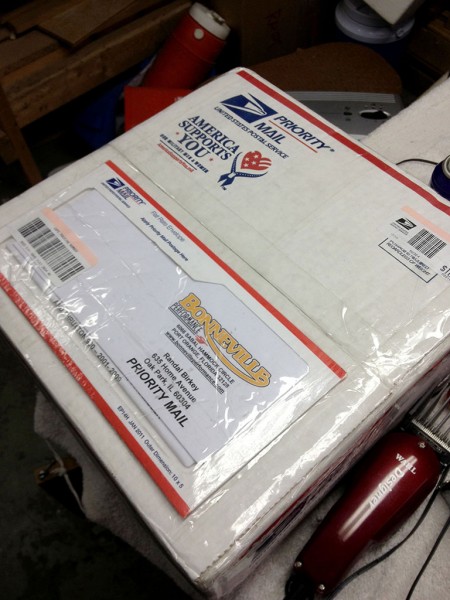 Inside contained all the pieces of the Mikuni carb kit. Carb assembly, fule lines, throttle cables, K&N filters, and the instructions. I didn’t notice any damage at first. 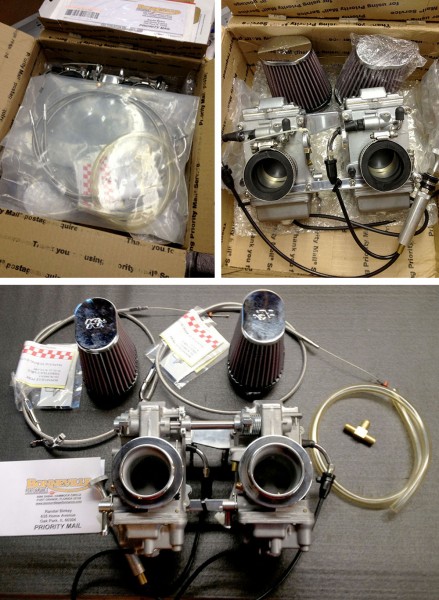 One thing I noticed right away was the size difference between the Mikuni HSR42 setup, and the stock Keihin CVK’s. A LOT more air can flow through the Mikuni’s! 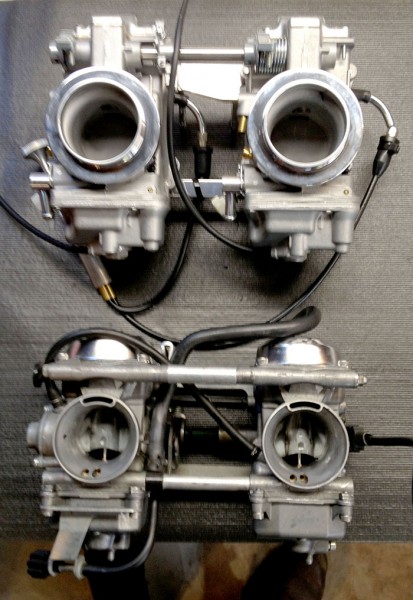 Size difference between Mikuni HSR42 (above) and the Keihin CVK’s (below).

I began the conversion process on Saturday, April 20, 2013. I put my Bonnie up on a floor jack, removed the gas tank, side covers, and twin OEM Keihin CVK carburetors that I have modified over the years (see other posts).

Per the BP instructions, I also removed the upper carb mounts to the engine. When I went to pre-fit the new Mikuni carbs to my existing TPUSA billet manifolds, I realized that they would not align properly (see photo below). I contacted Bill Gately at Bonneville Performance (who answered his phone on a Saturday) and we discussed the situation and decided that he would send me his BP billet manifolds on Monday. 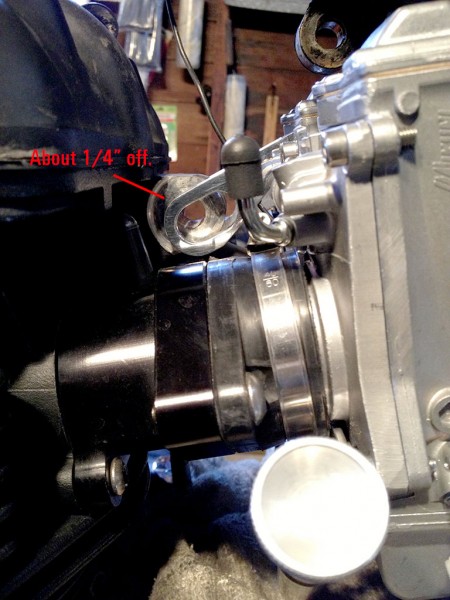 I also discovered that one plastic part of the choke assembly had broken during shipping, so Bill also agreed to send me a replacement piece to repair and correct that. 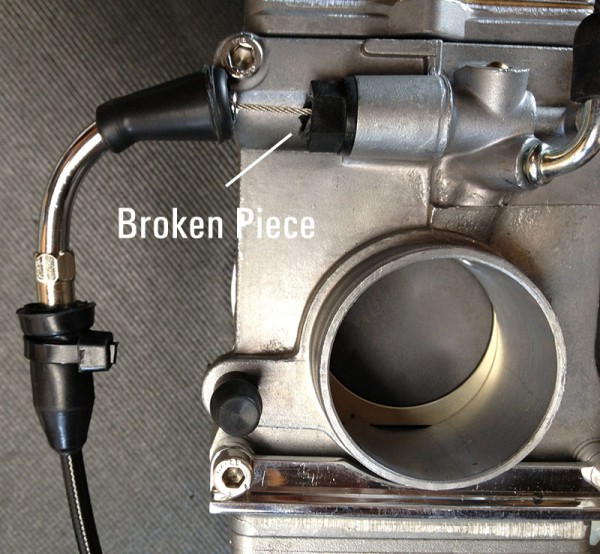 The BP intake manifolds and the replacement broken plastic fitting arrived and I was able to do some more pre-fitting and mounting. In the process of talking with Bill Gately on the phone, we discovered that my kit was also missing a piece for attaching the throttle cables to the carbs! He was very apologetic about this oversight and promised to ship that mounting part plus some marine grade rubber connectors that go between the carb and manifolds. Bill prefers the marine grade rubber over the stock OEM connectors because they last longer.

Here is a photo of the new BP polished billet intake manifolds on my 2008 Triumph Bonneville 865cc engine (Thank you Lee Hoffner). 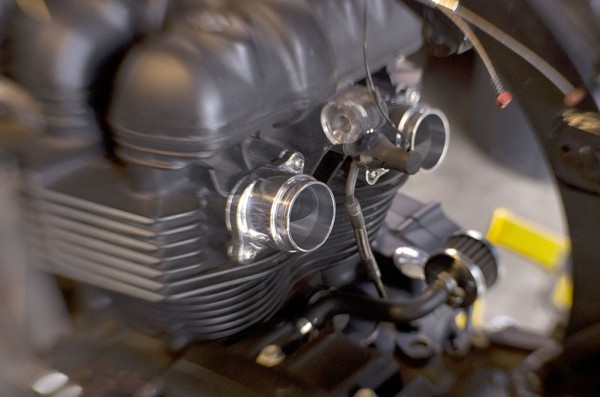 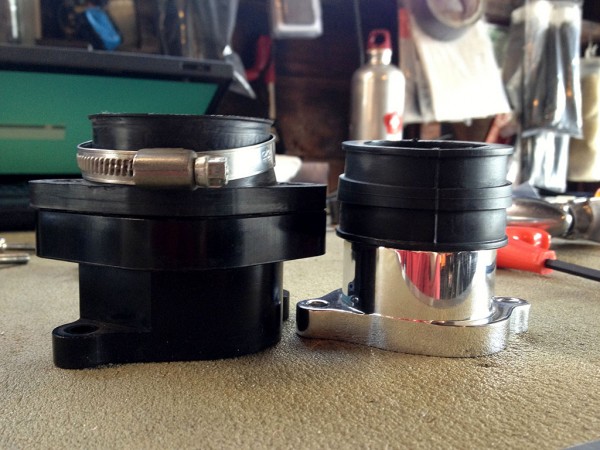 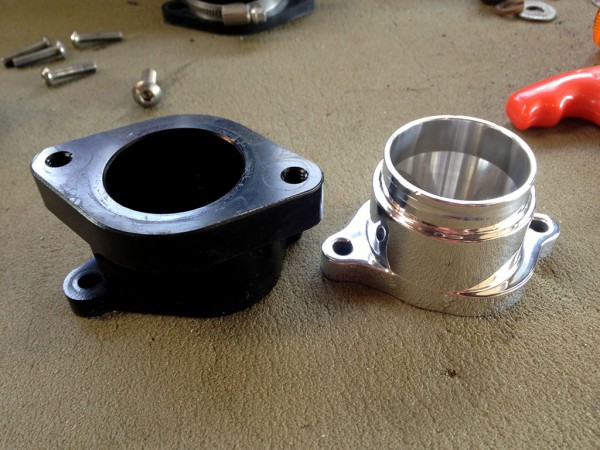 Side by side billet manifolds comparison: TPUSA on left, Bonneville Performance on the right. 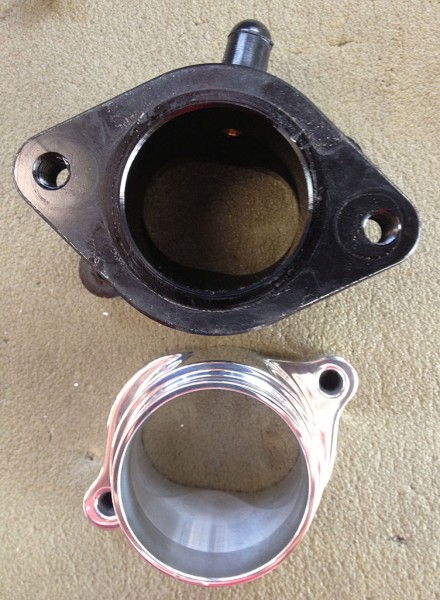 One thing I really like about the Bonneville Performance manifolds over the TPUSA design is the way the o-rings seat in their slots. Bill has designed the manifolds with small knobs that hold the new o-ring in place so it doesn’t slip out. This makes installation a breeze! You know this part was designed by a guy who has done this before! 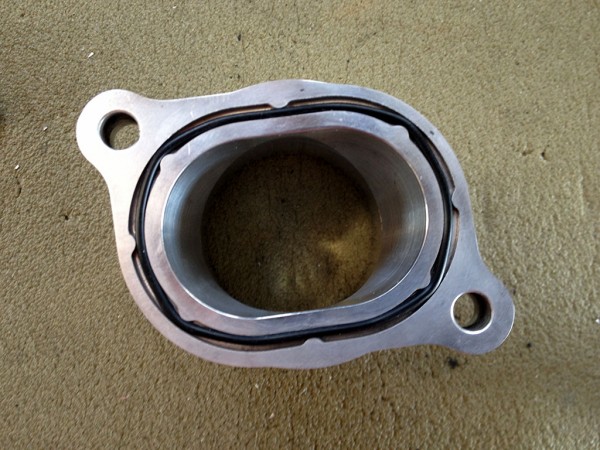 Here is the missing piece required for the throttle cable connection… which Bill is shipping to me. 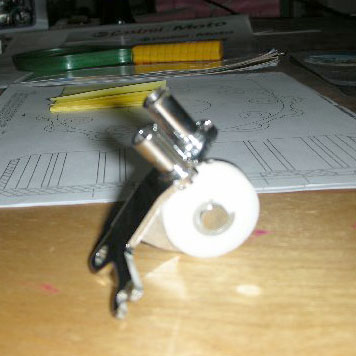 How the Mikuni carbs are looking with the new manifolds on my 2008 Bonnie. 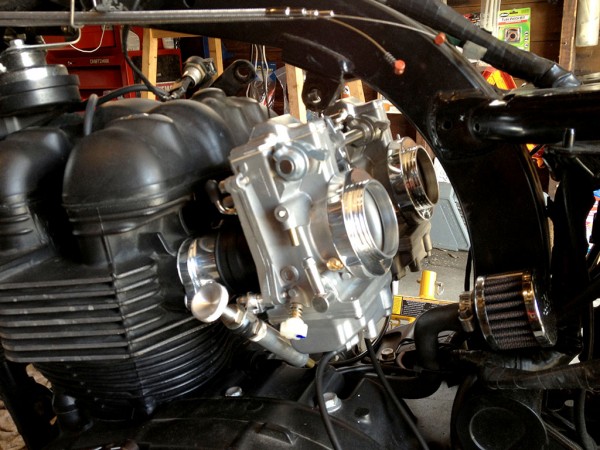 Well, my hopes to get the 2008 Bonneville running this weekend were not to be! The missing Mikuni throttle mount and marine rubber connector parts from Bonneville Performance arrived late in the day on Saturday via USPS. On Saturday, I was able to hook up the throttle and give the new carbs a try at starting the bike! It kicked over a little bit and when I tried to use the choke, not much happened. 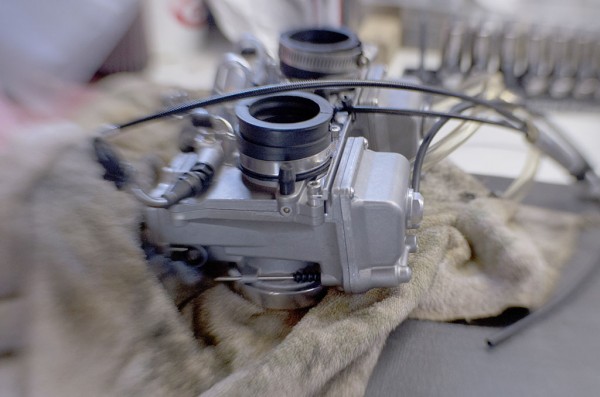 Then I noticed gas leaking out of the left carb bowl, right at the gasket seam. I gave Bill Gately a call and we discussed it. He thought that perhaps the float was stuck on the left carb. I did not have a short 2.5 mmm Alan head bit that would allow me to access and remove the float bowl bolt heads, so I stopped the project until I could get the bit on Sunday.

After getting the tool I needed on Sunday, I removed the float bowl, and discovered the float was working fine. However, I noticed that the float bowl was missing a gasket, which accounted for the gas leak! See the empty slot in the photo below. 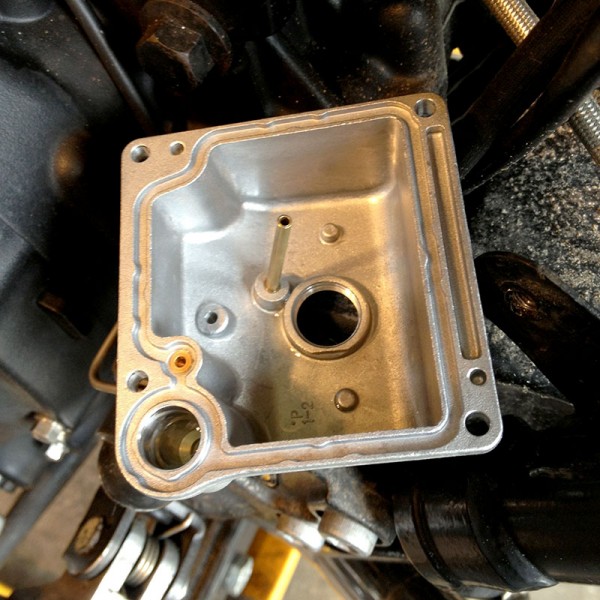 I called Bill again (who answered his phone), and he was very apologetic, and offered to send me the float bowl gasket, two new marine rubber connectors (shorter), and some parts to fix the choke cable which after discussing with him, I realized was also broken during shipping in more places than I had originally noticed. The broken choke cable is probably the main reason the bike did not start. 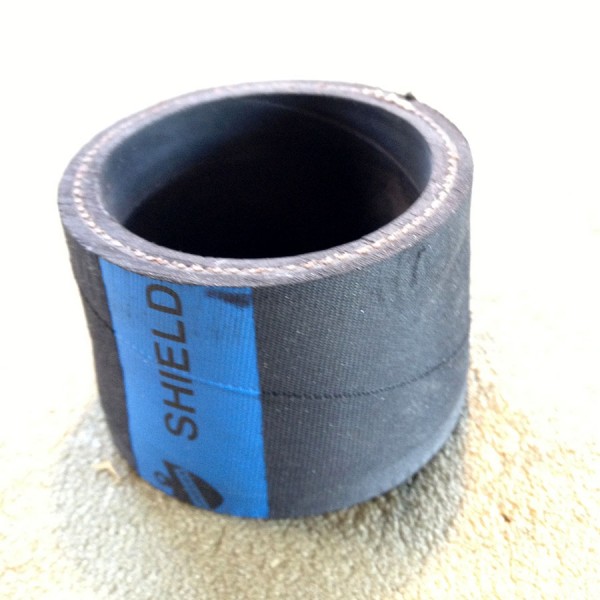 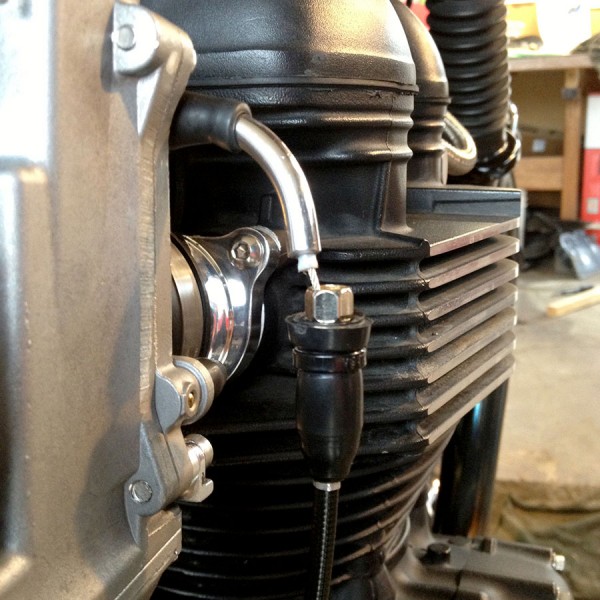 Yes, it is frustrating to have this project go on longer than necessary due to misjudgments about the manifolds, and missing and broken parts. I am anxious to get the Mikuni carb conversion kit fully installed and the Bonnie running so I can report on the hoped for improvement in performance! I also hope that if anyone out there decides to do this upgrade, your experience will be better than mine!

The parts arrived! I was able to install the missing gasket between the left carb float bowl and carb body. 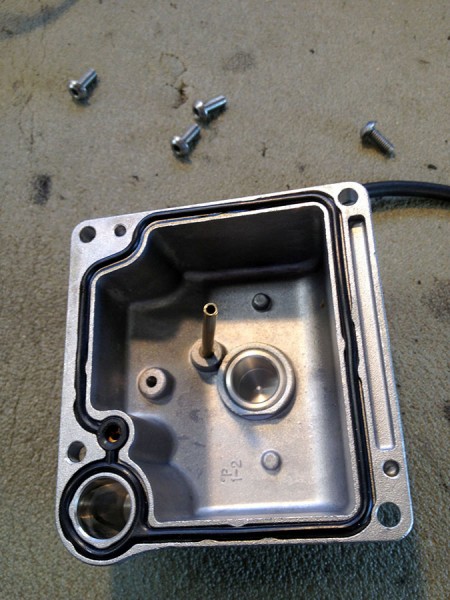 Then I connected the bowl to the bottom of the carb with the 4 stainless steel 2.5mm Alan head bolts. 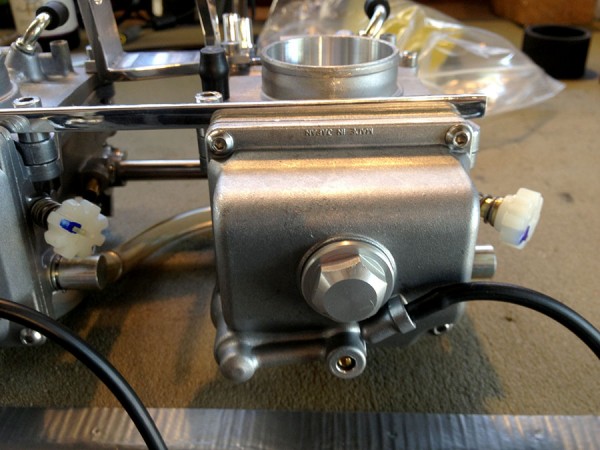 Next I repaired the broken parts of the choke assembly with the new parts that BP had sent. 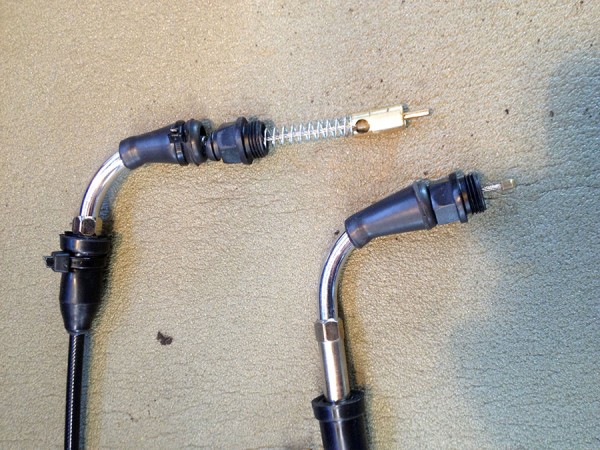 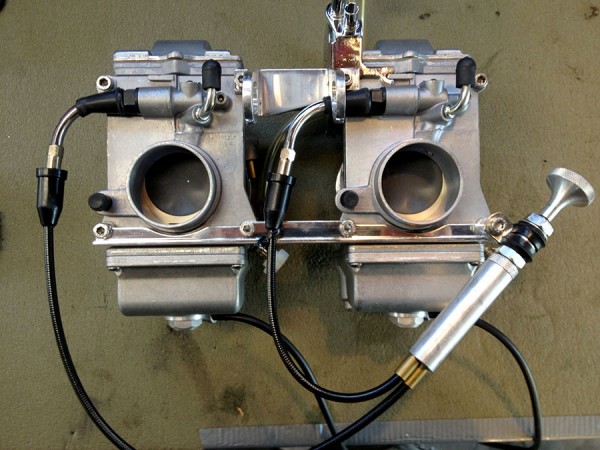 Then I attached the new marine grade rubber connectors on the billet manifolds using stainless steel clamps. This then allowed me to position the carb unit in a place to attach the two throttle cable ends to the top of the carbs. 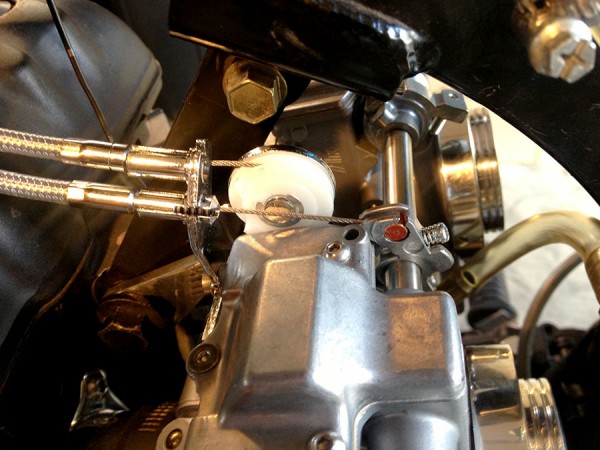 Push and pull throttle cables attached at the top of the carb assembly.

Next I mounted the carbs on the rubber connectors, clamping them with additional stainless steel clamps. I then connected the top carb mounting bracket to the engine and frame.

This was followed by attaching the two new K&N air filters, and threading the carb bowl overflow hoses to drain out the bottom of the bike. Next, I mounted the gas tank and connected the fuel line.

I gave the bike a trial start to see if it would run… and it did. It coughed and choked a bit at first, and I used the choke assembly to help it along. I noticed a popping sound during idle, so I gave Bill Gately a call. He described how to adjust the airflow on each carb using a long flat head screwdriver. The popping took only a minute to fix!

Finally I added the side covers, seat, gas tank vent hose, and then gave everything one more going over. I then took it for a spin! Everything all put back together and ready for a spin!

The first run went well. I noticed a more powerful throttle response right away. On decelleration, the bike makes a gurgling sound without any of the “popping” that I had become used to with the modified CVK’s. During the 5-mile side street ride I was not able to take it over 40 MPH, and the bike performed better than the previous carb setup. I am anxious to try it on the highway within the next day or two. 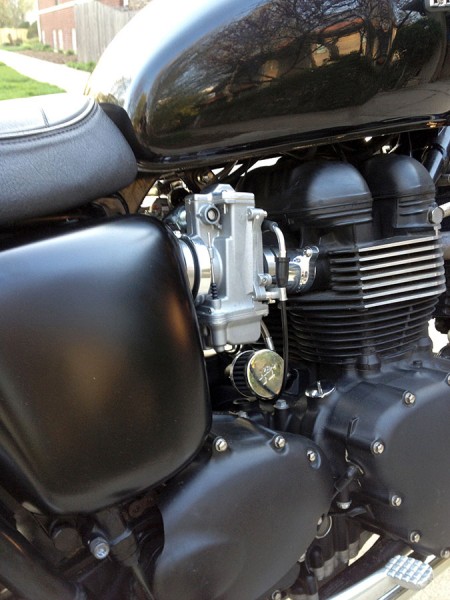 After the maiden voyage, it seemed to me that the right side choke cable was a bit exposed to potential bumps, catches and potential breaking. So, I fashioned a small aluminum brace secured to the right carburetor, to hold the cable more securely in place. I feel better about it now.

I plan to connect with Bill Gately today and see about making more fine tune adjustments for optimum performance.

Last night I used my new Motion Pro Carb Synchronizer tool to try to sync the 2 new Mikuni carbs on my Bonnie. I purchased it online through Amazon for approx. $65. 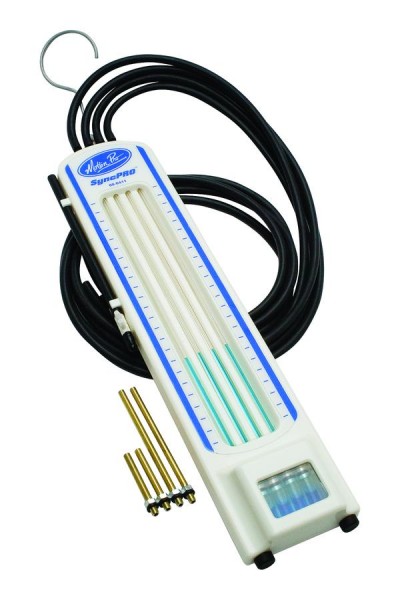 It was fairly easy to set up and calibrate, although the instructions could use a few more diagrams or photos to help people understand how to get it setup. Anyway, once applied to my carbs I saw what I had assumed was true that the carbs were not balanced. The left carb was pulling about twice as much as the right carb. I am sure this is what was causing the smell of gas (too rich) and poor gas mileage.

I called Bill Gately and we discussed the matter. He gave me a set of steps to take as follows:

I did these steps, and I even pulled the carbs completely off to recheck the enricher cables (choke).

Once everything was back together and tightened down, I started it up again, and it seems to run much smoother. The carbs are still not completely balanced the same, but are better. I think there still may be an issue with the enricher cables that are affecting the balance between them.

This past weekend I was able to make some additional adjustments. I took apart the choke-enricher cables and made sure they were pulling the same amount on both carbs. I aded an extra throttle spring to pull the throttle closed much quicker upon release of the grip. I used the Motion Pro to sync the carbs again and seemed to get it running a little better. My average gas mileage is now between 36-43 MPG depending on percentage of highway-city driving and road conditions.

I am riding down to Springfield, Illinois to watch the AMA Flat Track Races on Sunday May 26th, at Bill Gately’s invitation. I will have him look my carb kit over and help me get it completely dialed in. I am very excited about seeing the races as well, especially after viewing this promo video produced by Triumph.